Over breakfast at the Palm Court, we were disappointed to learn that our snorkel trip to Koh Surin had been delayed, not least because we immediately had to re-pack for a very different trip to Khao Sok. But we were pleased to learn that we were moving on, and that there was reason to hope that the park service would have Surin’s beaches cleaned up to its satisfaction well before we would be leaving Thailand. For those keeping notes, we had a somewhat traditional breakfast of rice porridge with a wide variety of “stuff” on the side. I ordered combination B, which came with three plates of strong-flavored dishes that could be eaten with or added into the porridge. These were Chinese sausage chunks stir-fried with vegetables, salted fish (not my favorite) stir-fried with vegetables, and thin pieces of fish (or was it chicken?) sauteed in a slightly sweet yellow sauce. The portions seemed immense for breakfast, but we would need the energy!

Our first stop out of Ranong was at a village near the port town of Ban Hin Lahd, from which we would have departed for Koh Surin. We were told that this largely Muslim community had not received relief funds. Using a list provided by a village elder, we donated funds directly to local families who had economic losses from the tsunami, such as damaged or destroyed fishing boats. After the envelopes had been handed out, several others came forth and protested that while they had not lost boats, they nevertheless were hungry and had lost much or all of their incomes. We provided some funds for these families as well. (Of course, improvised efforts often involve oversights: others were left off the list and would later receive support from Kasma and her fellow travelers.)

Our lunch spot was a restaurant down the road in Takua Pa that specialized in rotis, a kind of thin bread that has the scent of a croissant and the versatility of a tortilla, all in a fluffy, piping-hot package; the roti is to the crepe as scrambled eggs are to the omelet. The main course was one or more rotis torn and dipped in chicken or beef curry. This was accompanied by turmeric chicken and rice, and followed by a dessert roti drizzled with condensed milk and sprinkled with sugar. Stronger than Atkins.

While we were eating, a couple of helicopters flew overhead and landed at a military base across the street. The town appears to be a point of coordination for tsunami relief efforts in the hard-hit resort area of Khao Lak. Poeple in the community believe that the government may be undercounting the dead and missing in their province, to avoid negative publicity.

After lunch we headed to the park. Khao Sok National Park consists of protected rainforest habitat and the enormous Ratchabrapa reservoir, better known as Cheow Lan Lake. The park has a large number of limestone karsts, towers of limestone pushed up hundreds of feet by the actions of plate tectonics. After making a few stops for photos, including a rubber plantation by the side of the road, we made our way to the top of the dam, where manicured lawns and flowering bushes replaced rainforest scrub. From there, we headed to the pier and boarded a “longtail” boat, a wooden boat powered by a diesel engine that could accommodate our party of 12 with room to spare. Passengers on the very front of the boat and in the seats in the back generally could avoid being splashed, but would be exposed to the full heat of day (due to unseasonably cool weather, the sun was not a problem). The cargo included an overnight bag for each passenger, plus bags of fish and vegetables, and a cooler full of bottled waters and (presumably) other delights.

The karsts featured a variety of vegetation, from spartan to lush, and extremely varied surface textures, from sheer rock to cave-like stalactites, all eroded by the rains. After 45 to 60 minutes we arrived at the dock below our cabins and began our trek up the steep staircase toward our common area and cabins. After dropping off our bags and changing for a swim, we headed back down to the longtail for our pre-dinner adventure. We crossed the lake to “the raft,” an older and seemingly more party-oriented set of accommodations. Here the water is relatively clear, deep and warm. There was whiskey and soda to drink, which in Thailand is more economical than beer. We moved on in time to see a large number of bats leaving their caves for evening hunting. As night fell, we headed back across the lake. Our driver swept a powerful flashlight in front of the boat, and to the sides, to avoid tree branches poking up though the water, and other hazards. 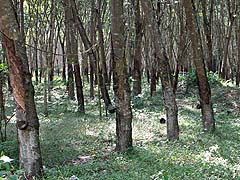 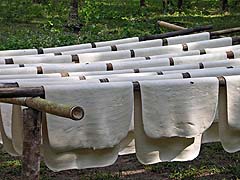 There was barely time to change into more mosquito-resistant clothing before dinner was served. Consistent with national park cooking philosophy, a large quantity of a few dishes was served. First up was a fried whole fish (garani?) with a garlic-chilli sauce on the side. The fish, brought over on our boat earlier in the day, was extremely fresh and tender, and the thin dressing with slices of garlic was delicious. Fish also featured in a hot “Southern style” red curry with bamboo shoots. Really hot. We also had a mild vegetable dish and a Napa cabbage and tofu soup. Dessert was triangles of watermelon served with toothpicks.

We retired to our cabins, each of which featured six mattresses (three to the platform on either side of the cabin). I shared a cabin with Michael #2 (there are three Michaels in our group), an amiable New Yorker who prefers to winter in Thailand. (He was in Phuket when the tsunami hit, and has seen more suffering and devastation than we dared ask about.) The cabin was over 80 degrees, but fortunately, we passed out before the fan — in fact, all electricity — turned off at 10:00 PM. There was an opportunity to go kayaking on the lake before our 8:00 breakfast and baggage call, but I suspected that I would not be among the kayakers… y’all know I’m not a morning person. Instead, I would use the time to pack for the next phase of our journey, to Nakhon Si Thammarat.