I kept waking up. Was it jet lag? The huge sticky rice and mango dessert I wolfed down the night before? Random worries left over from work? The rock-hard bed? Or just the nervous anticipation of hooking up with a new group, 12 people I have never met with whom I am about to spend 28 days in very close quarters. I distracted myself with the computer and occasional glances at the city lit by sunrise. The relatively clear sky above the smog layer promises another hot day (we don’t get forecasts in Fahrenheit here, but I suspect it will be in the 92-95 range).

After a long wait at the airport, we met up with eight of the group (the other four arrive in pairs later today and tomorrow). For lunch, we headed to A. Mallika, a restaurant in the outer neighborhoods of Bangkok. We started with a tasty coconut confection ordinarily found at street markets, followed by crunchy mee krob noodles in an edible basket made from taro shreds. After this we began the onslaught of hot peppers: a salad of thinly sliced mackerel presented with lettuce for wrapping and flavor enhancers like cilantro, mint, diced ginger and lime, onions and peanuts; a fiery stir fry of beefy ostrich slices; tiny bits of deep fried fish which had completely absorbed a red curry sauce; and a soup with shrimp and sour greens. After this, a crispy roast duck served with thin crunchy noodles and a sweet dipping sauce was a relief (in truth, it was hard to taste anything, but the texture was excellent).

We finished with dessert. The house-made coconut sorbet was excellent, and even more impressive in a double-portion served inside a young coconut with the coconut water on the side. A small dish of coconut pudding was served to everyone. After dessert, it was difficult to remember the pain that came before… a good pain that we will experience again and again for the next 28 days. 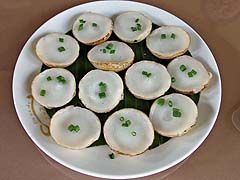 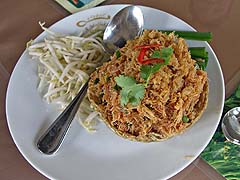 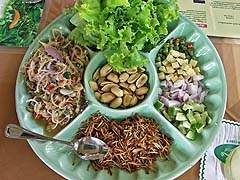 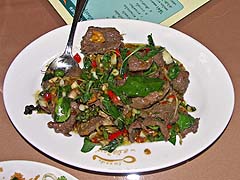 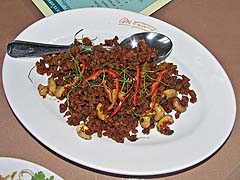 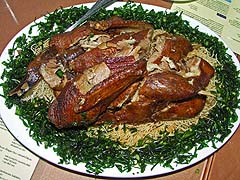 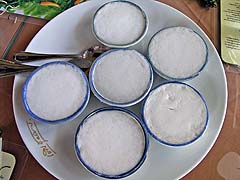 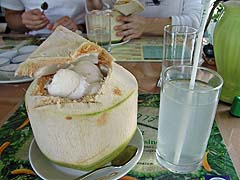 It was time to battle traffic and return to the hotel. There would be time before dinner for a massage, or checking email, or shopping, or maybe all three. I returned to Hatthai for the two hour traditional thai massage. New masseuse this year, and I was really surprised and nervous when she walked on my back. Fortunately, I survived, dehydrated and disoriented, and hoping that it was all worth it. But there was little time to reflect on the experience before we headed out to dinner, returning to Thon Krueng.

This year we sat outdoors under strings of lights and the breeze of numerous fans. Repeat dishes from last year included the deep-fried cottonfish in a panko-like batter with a light sour-sweet sauce similar to a salad dressing, containing shreds of green mango; a spicy fish curry mousse served as individual steamed cakes on the ceramic plate (with individual wells and covers) in which it was steamed; and morning glories sauteed with garlic and stealth green chillies. A prawn salad, chicken satays, and a soup of gelatinous beef tendons rounded out the menu. For dessert I tried a concoction of green noodles (colored/flavored with Pandanus leaf extract) in a glass of shaved ice, coconut milk, and sweet syrup, served with a fat straw. This “Singapore Style” preparation definitely would appeal to the teenage set. 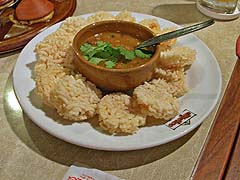 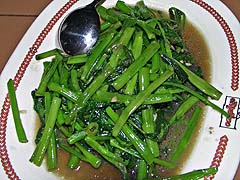 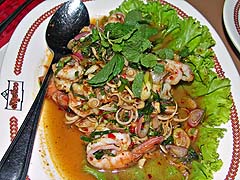 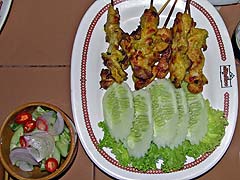 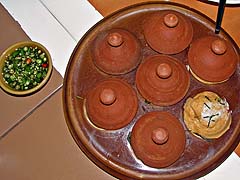 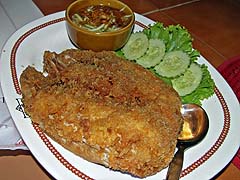 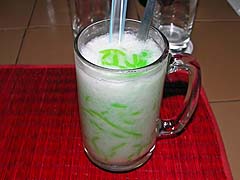 Tomorrow morning we leave the hotel at 7AM for street market specialties, and then head to the Chatuchak Weekend Market for several hours of intense shopping. We’ll need all the sleep we can get!

It’s Saturday morning and the sidewalk between Sukhumvit Soi 55 and Soi 57 is jammed with vendors, some backed up against the buildings and some in the street. Lots of fruit and flowers, raw fish and charbroiled meats. We picked up sweet jackfruit; salty-sweet little khanom krok coconut pancakes (some with corn kernels); fried overstuffed chive dumplings in a sweet soy dipping sauce; sweet, easy to peel mandarin oranges a little smaller than a golf ball; and for dessert, a coconut confection steamed in a leaf wrapping. For the main course we returned to the familiar local noodle shop where elastic rice noodles topped with numerous differently shaped dumplings all made of fish cake were served “hot and sour dry style” or in a choice of soups. With plenty of peanuts and dried chillies to sprinkle on top, it was a real treat and provided serious fuel for our visit to the mother of all markets.

Chatuchak (“JJ”) weekend market features thousands of stalls sorted into sections, roughly according to the type of goods sold. We spent the most time in the “miscellaneous” section, which seemed to offer more attractive items than the “souvenirs” section; kitchenwares were good, too. I wasn’t looking for any types of gifts in particular, and examined against the test of “likely to be used or displayed,” there wasn’t much I felt like buying. I was able to find some flip flops and a large fiberglass bag for boat trips for myself. I will have to pick up gifts on the way out.

For lunch we returned to the immense Toh-Plue restaurant. The fried catfish salad was the standout: cooked catfish that was flaked into tiny fibers and then deep fried, served over finely shredded cabbage and topped with a limey dressing featuring shredded green mango. Compared with our other meals, this one was a bit bland, but I suspect we will make up for it tonight. 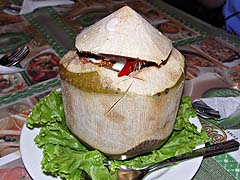 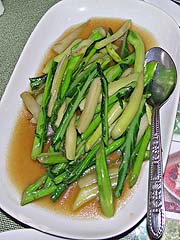 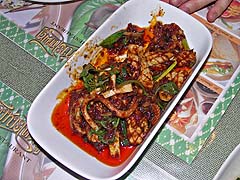 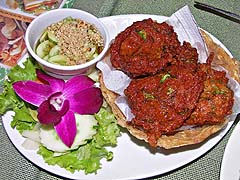 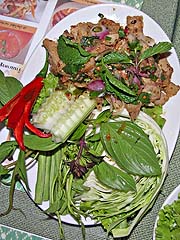 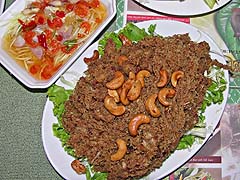 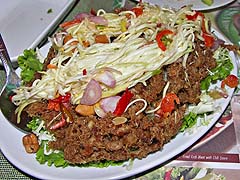 Somewhere along the way I misplaced my lens cap, so I took the Skytrain to the main shopping area to try my luck there. After a few strikeouts, I found a photo store in “Central World,” a shopping center under heavy construction that reeked of solvents. They had a “no name” cap that fit. Upon my return to the Internet cafe, I spotted a camera store across the street. Wish I had noticed that before!

For dinner we walked a few blocks to My Choice and sat in a pleasant and strangely quiet outdoor patio. The first dish to arrive was a plate of mildly spiced duck buried under a layer of spinach-like leafy greens. This was followed by a plate of Southern style crudités — green beans, slices of cucumber and young turmeric, and a banana blossom — with a rich crab meat and coconut dip. Over the next several weeks, we will see a few different variations on this theme. Next up was a delicious salad of shrimp and sliced wing beans with fried shallots and something crunchy (toasted coconut?). We moved into hotter territory with a plate of squid with basil and a salad of tender smoked eggplants. The masaman curry of beef tongue, served with roti (fried layered bread, more on that another day), was pleasantly rich and sweet. The last dish to arrive was the most devastating: a Southern curry with chicken and mixed vegetables (including baby corn that tastes like fresh corn!). Oddly, some diners did not find the Southern curry to be hotter than the other dishes; perhaps they had crossed over to the endorphin high that chillies can cause? Not that we are addicts here, oh no. Is there any more of that eggplant salad? 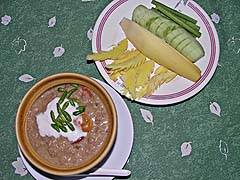 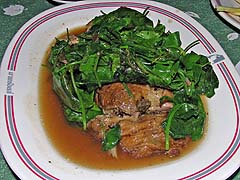 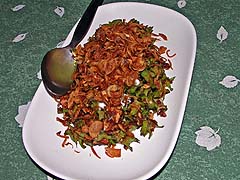 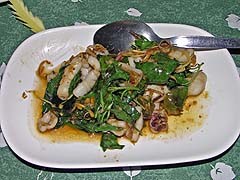 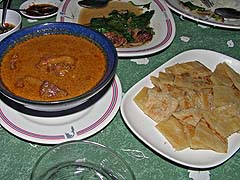 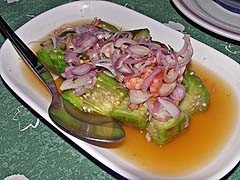 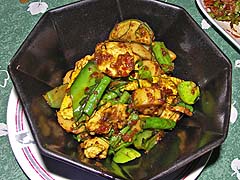 Before dessert, Kasma passed around some rambutan that she had found at the market. While we peeled the fruit’s tough skin, she described our itinerary for the journey South. All along the way will be more opportunities to eat! Dessert brought several types of coconut ice cream, including coconut basil seed and coconut taro. It wasn’t long after returning to the hotel and setting my alarm for 4:00AM that I simply passed out.