If anything, the road from Pai to Chiang Mai is even twistier and has more altitude changes than the road from Mae Hong Son to Pai. After about 90 minutes we stopped at a tea shop for another tasting and a brief glimpse into the tea-making process. Our proprietor poured a locally grown Chinese style black tea and a locally grown green tea (with a more Japanese character). In the back, a man was wilting tea leaves in a drum rotating over a fire. The leaves moved from one pile on the floor, into the drum and back out again, and then were swept into another pile on the floor. It was not obvious that this was something you would want in your mouth. Too late, we had already tasted. Anyway, there was little time to dally. A few purchases and we were on our way.

Around noon we stopped for lunch at one of the numerous open air lunch spots in the outskirts of Chiang Mai for a very (spicy) hot set of Isaan style dishes. These included the triumvirate of barbecued chicken, green papaya salad and sticky rice, and also a delicious barbecued pork. We also had three other salads, a pork “waterfall” salad, a pork larb with some hidden innards, and a bamboo shoot salad. 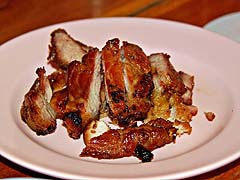 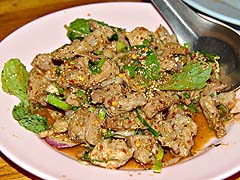 Located at the center of historic trading routes, Chiang Mai is Thailand’s handicrafts center. Our time here would be heavily devoted to shopping opportunities, including factory tours and the multi-block night bazaar. Of course, some eating would also be involved.

Our mouths burning, we set out for our first stop in the city of Chiang Mai, an orchid and butterfly exhibit. This stop was unusually touristy; there is no admission fee because apparently enough people eat here and purchase souvenirs to cover the cost of operating the facilities. I snapped lots of photos, but I was out of cash, and nothing in the shop justified borrowing money. Quite the opposite was the case at our next stop, the showroom at Mengrai Kilns. Filled with beautiful but mostly decorative pieces of crackle-glazed celadon ceramics, it was not difficult to find interesting items (e.g., serving plates) for purchase. 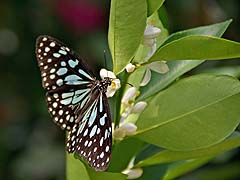 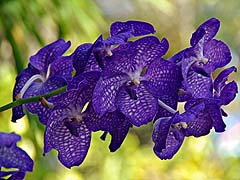 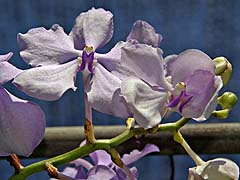 We checked into the Diamond RiverSide hotel, and I settled into a room on the tenth floor facing East over the river. I dropped off some clothes at a nearby laundry place. They don’t inventory the items or give you a receipt or even a number. I guess people here are too honest to accidentally pick up the wrong laundry? I headed up the street to the Post Office. Due to heavy traffic, I detoured a block over to a crosswalk and waited for the light. At some point, a countdown timer appeared, starting with 9 seconds. Although cross traffic has a red flashing light, most drivers interpreted this as a mere suggestion and whizzed on through the intersection. When I reached the spot on the Lonely Planet map where the Post Office should have been, there was a school; the Post Office was across the street. Much danger was involved in securing a box and getting it back onto our block. I ducked into an Internet place to check email, and found several trip members there. In addition to offering a good connection, the place sells beers. Ingenious. Eventually I made my way back and discovered that I already had enough items to fill my new box. Hmmm, I might need an upgrade.

For dinner we headed next door to the Antique House restaurant. One of the advertised specials of the day was fried pork leg, which we had enjoyed on the Southern trip. This was not quite as good, but still, it’s hard to mess up a fried pork leg… 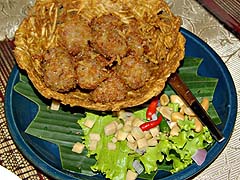 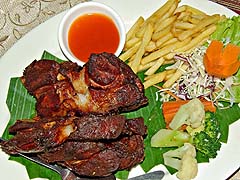 After dinner we headed to the night bazaar, which starts only a half block from the hotel. There are three large, relatively calm sections of the market, two in buildings and one in a parking lot. However, there also are vendor stalls lining both sides of the street in almost all directions. I later discovered that away from “our” alley, it is an ordeal getting down the sidewalk. In the older building, we perused antiques (some more recently manufactured and “antiqued” than others), along with clothing, contemporary handicrafts, and a bunch of junk. There are a few items I want to go back for, but as I had almost no cash, I was mostly conducting research.

Tired of shopping, and hot, I searched out a young coconut to drink. This was when I got stuck in the tourist traffic jam on the sidewalk, as we slowly wended our way past jewelry and t-shirt stands, solo vendors covered with merchandise, Burger King and McDonald’s. Finally, I ducked left down another alley into Anusarn Market. I found my coconut and was sipping it contentedly as I strolled when a massage vendor invited me into her pavilion. With eight seemingly satisfied customers and at least as many empty chairs, a big smile, and an excellent price, she sold me a one hour foot massage without too much difficulty. I got a recliner and my coconut got a stool, and the massage proceeded very much in public view. I sat across from a burger joint named Mike’s whose slogan is “Converting Vegetarians,” but actually business seemed slow in this little side market. I was happy to be away from the main action; tourists streamed by and took in the scene, and vice versa. I finally got home around 11:00, knowing we had a big day of shopping ahead. I rolled into bed with one clear priority for the morning: I had to find an ATM.