The hotel said they would open their dining room at 6:15 am to accommodate our schedule. However, they failed to mention that the food would not arrive until 6:30. Perhaps that is unfair to the white bread and sliced fruit — they are foods, too — but the extra 15 minutes built into our schedule already was being squeezed out.

As we headed to the pier at Ban Hin Lahd, we passed through at least 3 checkpoints. There is a serious effort here to crack down on Burmese immigrants. Fortunately, none of us merited close inspection.

The Surin islands are Thailand’s premier snorkeling destination. Even on a Monday, numerous campers and day trippers were headed to the park. Thus, the ferry would be leaving a bit late as the paperwork became backed up. On my earlier trips, the ferry was a very large boat, but to save money, the park has been hiring speedboats to operate its scheduled routes. This led to a very crowded ride as the six of us occupying the two little bench seats up front were joined by four more, and by a few huge pieces of luggage from some late additions. Still, I love the wind in my hair and my stomach prefers the open air to a stuffy cabin. There seemed to be less to photograph this year: no swarms of seagulls were spotted snacking above the waves, and a dolphin or turtle or two on the other side of the boat went by too quickly to capture. Perhaps on the way back?

True to its name, the speedboat made good time, and we arrived well ahead of the availability of our rooms. So we snacked and ate a box lunch of yellow (turmeric) rice and chicken, supplemented with snacks from the market. Finally we got our keys and, making a quick change to snorkel gear, we climbed into our longtail boat for our next adventure. (For those not familiar, a longtail boat is a low wooden boat powered by an outboard motor with a very long, highly maneuverable propeller shaft. The engines make a loud clatter and can belch out smoke in unfortunate proximity to the boat’s passengers.)

Our destination this afternoon was the reef at nearby Ao Mae Yai (Mae Yai Bay), about 3 miles from our beach. The engine quit a few times, but eventually we made it. The reef has multiple personalities: at its edge, the water is a bit dark and carries quite a bit of food, but the variety of corals is fantastic; in shallower water, the visibility is great, and there are more anemones and docile reef fish; here and there, though, are dead zones, perhaps not yet recovered from the tsunami. After scouring my snorkel bag, I could not find my underwater camera. In the reverse application of Murphy’s Law, this usual means the photography opportunities will be plentiful, and in fact the reef was very picturesque. Attempts at diving were immediately frustrated by my clogged sinuses. Trying probably was a mistake: I discovered a major nosebleed when I got back to the boat. So I just floated around and enjoyed the scenery, which arguably is the whole point.

We planned to spend a short time at a second stop, but translucent pink jellyfish floating gracefully toward us kept us in the boat. We sped back for a cold shower — and a couple glasses of pre-dinner rum and soda. 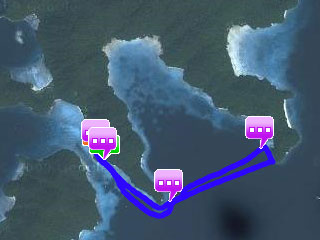 Dinner in the park is the same for all visitors, except for one table near us that had whole fish and some kind of omelet dish. Whatever special plan they’re on, we want to upgrade. But until then, we had deep fried squid with a garlicky-sweet sriracha chilli sauce, fish (mackerel?) steaks with ginger, spicy chicken with basil, and a soup of mild winter melon and bony pork. Kasma added two items from the market: moist and crisp rose apples, and a multi-layer coconut pandanus pudding.

It is remarkably hot and humid here during the day, and stays warm well after dinner. We have electricity in our rooms from 6-10, and we have more limited electricity for the ceiling fan and bathroom light from 10 to 6. Since we do not gather for breakfast until 7:30, this schedule is not ideal, but since I forgot to bring my own generator, I will have to make do.

The usual first full day schedule was swapped with the morning sites visited in the afternoon and vice versa. The theory was that we would have a better chance of seeing turtles and sharks, but these larger creatures were mostly absent. Still, we saw a LOT of fish and beautiful corals, and some remaining tsunami damage. Between the fourth and fifth sites, we spotted the plume of a whale’s exhalation and saw a bit of its back, but we passed over its position while it was deep under water, and we were not able to identify the species from afar. 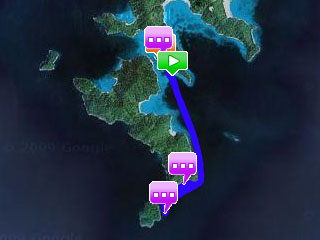 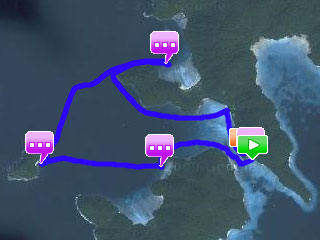 We returned a rosier shade than we started, except for those with full length skin protection. My left ear is now quite a disturbing shade (I think my snorkel strap rubbed off the sunscreen and I failed to notice this until too late.) Tomorrow, we rise early and do it again.

Today, it’s breakfast, snorkel, snorkel, lunch, snorkel, snorkel, Moken village, dinner. An extra-thick slathering of sunscreen will be required, as my calves and the tops of my feet were overexposed yesterday. Some of the Moken people, also known as sea gypsies, were resettled on a nearby beach. They often have tourists drop in, and are prepared with wooden boats, baskets woven from reeds, and a few other fund-raising items. We made a few purchases to help out during our brief visit. 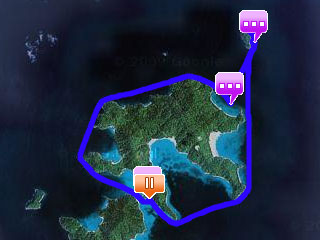 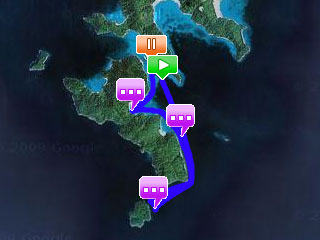 The ferry is leaving later than expected, so there might be time for a morning snorkel. On the one hand, ouch, my skin. On the other hand, where better to be in the morning than in the ocean?

Another humid morning in the cabin putting on wet swimwear. It will be nice to return to dry land and a little air conditioning. But that’s later: now we snorkel. Nothing very special this morning compared with yesterday, but we had to squeeze out a couple of hours before a fast shower and noon checkout (enforced with a $30 charge if you are late). 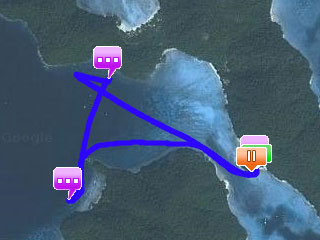 After lunch, we had quite a wait for our ferry, so we variously napped, read, roamed the island, and copied photos onto the laptop. (Guess which one was me.) Getting to the ferry was a challenge: the tide was incredibly low, so we had to wade out in knee deep water to our longtail. I had switched to long pants for sun protection, and they failed to stay rolled up as I struggled along under the load of two duffel bags and a backpack. Did I mention the swirling sand that often obscured rocks or pieces of coral on the bottom, making the journey particularly hazardous for bare feet? Once loaded, our boat putt-putted pitifully as the driver and navigator picked their way slowly among the rocks. Eventually we made it aboard our powerboat and settled in for the swift ride back to shore.

The Kuraburi Greenview Resort never fails to impress, with its beautiful grounds, cool room design, and friendly, understated service. And its great restaurant. We started off with the classic coconut milk chicken soup (Tom Kha Gai), which is very nice here. A salad of ferns with a few shrimp and cashews and a generous dollop of coconut cream was cool and refreshing. The only seriously spicy dish was a shrimp dip (you could see several chilli pieces in every bite) accompanied by crunchy vegetables. A fried red snapper arrived slathered with a chunky sauce of shallots, garlic, and sliced lemongrass. A yellow curry with chicken (and pineapple, which seemed out of place), and a green leafy vegetable with dried shrimp rounded out the set. For dessert, we had fried bananas with an optional honey drizzle.

After dinner, we had our karaoke hour. Most other guests were seated on the far end of the dining room, well away from our noisy table, but the sound system was cranked up loud enough for them to hear. My apologies. From the group, we had 3 (more or less) willing singers for various solo and group efforts. I started off the festivities, and also joined a couple of fellow trip members for another song. Kasma’s husband Michael and one of our drivers sang the Thai/English version of the prik kee noo song, an ode to the famous Thai chillies. And Kasma joined Michael on two other songs. We could have gone on forever, but we are moving on after only one night, and we could use a little luxury while we’re here. Perhaps the singing can resume tomorrow.

One Response to “Rustic Snorkeling Heaven”