We have a day of transition before our next island destination but this, too, will be spent mostly in a swimsuit. Heading North from Trang to Krabi, our first stop was a small restaurant serving local-style dim sum. However, seeing that a tour bus had just dropped off passengers there, we drove another block to a second place. It had less selection, but it was okay. Those less than impressed would not have to wait long for another bite: we soon would be stopping at the Kook Ming cake factory!

The Kook Ming story begins with an entrepreneurial immigrant opening a coffee shop and discovering that Thais wanted cakes with their coffee, but found European style cakes too sweet. The results of his experiments were successful, and widely copied. The originals, still sold only from the store in front of the kitchen, are similar to pound cakes, but the way the batter is prepared gives them a texture closer to a sponge cake. The flavors are light, and make a nice dessert in hot weather. We took at least six boxes.

Up the road is popular Le Khaokob Cave. The cave formations are interesting, but the real novelty is that you enter and exit the cave by boat through a passage that gets lower and lower. The “belly of the dragon” section is especially harrowing, as you are lying down on the boat benches and protrusions from the rocky ceiling come perilously close to your torso and face. Some profanities might have been uttered. There is, of course, the obligatory photo-glued-to-plate souvenir at the end. 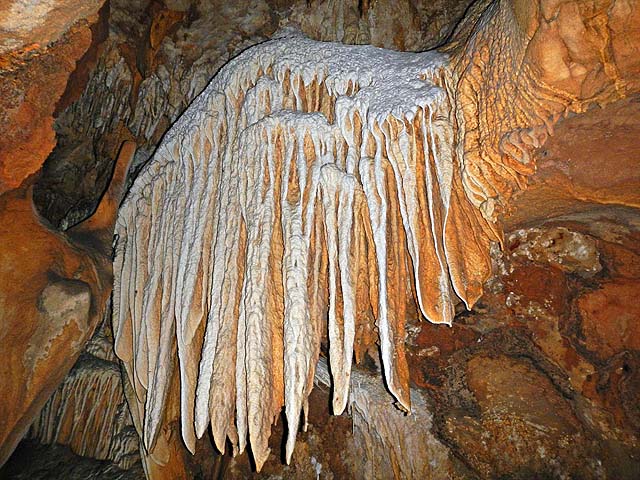 Heading up the highway to the next attraction, our van suddenly stopped and started backing up. We had stumbled across a local bird competition. About 80 cages were hanging in rows, and judges wore serious expressions as they marked cards hanging from the cages. When the next cage was tapped or its card stroked, the bird’s owner (all men, it appeared) urged it to sing. There didn’t seem to be a penalty for birds signing spontaneously, so it was a bit difficult to pick out any one from the others. Under a nearby tree one could purchase ice cream. Since this looked as though it could go on for quite a while, we returned to the road.

Our first order of business at the Sra Morakot nature trail was to grab some grilled chicken and green papaya salad at a stand just before the ticket booth. Tasty. We walked a little less than a kilometer to the Emerald Pool. The water is cool but not uncomfortable, and it’s crystal clear. A park official had the thankless task of reprimanding people who were diving or roughhousing. We walked back the long way, along a rustic forest trail. Actually, the rustic trail was recently replaced by an elevated concrete walkway with handrails. This seems to have affected the ecology of the area, as I did not see any of the usual pitcher plants, lizards, butterflies, or large banana spiders. Doesn’t leave much reason to take the nature trail. 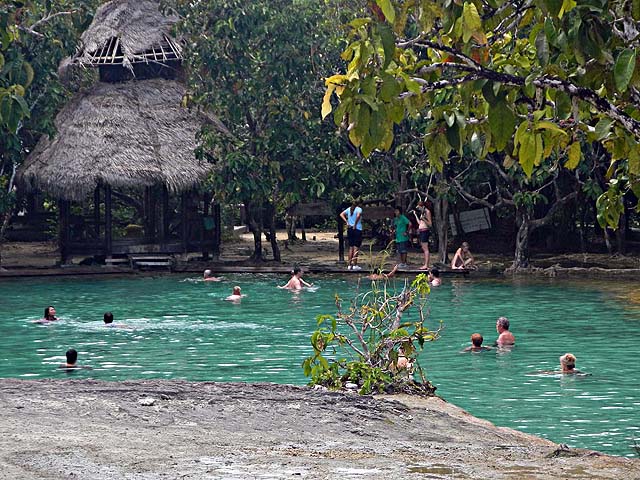 Our final stop before entering town was at a natural hot spring. I generally avoid this one, but the weather is unusually cool today, so it was quite pleasant. We did pick up a bit of a sulfur odor, so a shower will be in order before dinner.

Before checking in to the hotel, we stopped at Varich Krabi Batik, a workshop where we often find very nice shirts, sarongs, and other hand-painted items. I did find a shirt I liked in a size that would work, so it was a successful stop. It is a little strange buying a hand-painted shirt and having it wrapped in an Angry Birds shopping bag, but those birds seem to be everywhere in Thailand this year so it’s probably appropriate.

The Krabi Maritime Park and Spa was busy with a convention of Thai doctors who work in the U.S. One of my former work colleagues was there with her mother and recognized me in the lobby. Unfortunately, they were heading up the Bangkok in a few hours, so we didn’t have any time to catch up. Meanwhile, our rooms were the bottom of the barrel, but since we are here only one night, it’s hard to get too upset.

For dinner I donned my new shirt and we headed to Ruen Mai, one of Kasma’s favorite restaurants in Thailand. Our hot dish of beef kua kling (chopped beef with copious green peppercorns and pulverized red pepper) wasn’t quite as spicy as usual, but that’s okay. Chicken with panang curry, and fish steaks with choo chee curry, were smooth and delicious. A crunchy yum sadet salad, deep-fried pork belly, and shrimp and greens cooked in coconut milk filled out the menu. We will miss this on the island.

Rather than compete with the conventioneers at the breakfast buffet, we headed out early for a traditional breakfast of rice noodles and fried chicken. Freshly extruded rice noodles with ground fish curry could be further doctored with a fish kidney curry; I preferred the traditional vegetable mix-ins. After wiping my oily fingers, I broke out the camera for the kitchen tour. However, nothing new compared with two years ago, so check out the old photos (Freshwater Adventures).

To catch our longtail to the island, we headed to Ao Nang, a busy strip of guesthouses, shops, travel agencies, and hawkers on the Krabi coast. It wasn’t too long before we were landing on the Railay Peninsula, home to several popular beaches, expensive resorts, popular rock climbing destinations, and a cave full of wooden phalluses. Wandering the path here, I saw a monkey. More importantly, the monkey saw me and called the whole troop down. Pretty soon they were performing for the tourists, presumably in exchange for snacks from those so inclined. If pictures from here seem posed, now you know why. 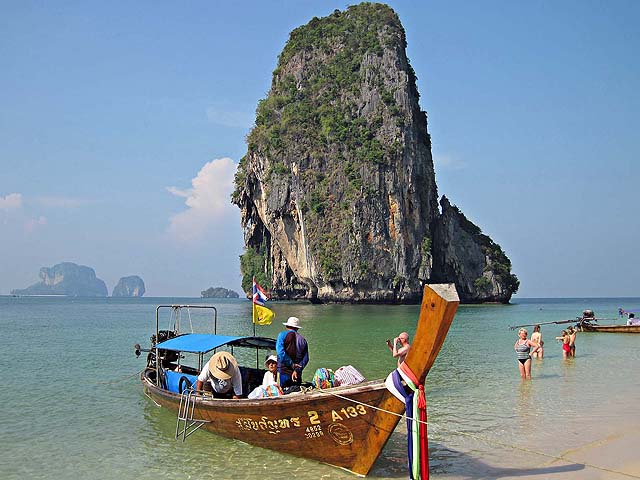 Since there was no rush to get to our island accommodations, we made a few snorkeling stops. First, we snorkeled a reef on one side of Chicken Island. Then we broke out some box lunches to eat on the boat — this saves the landing fee, so potentially more budget for snacks. We hit up two more spots before turning for “home.” 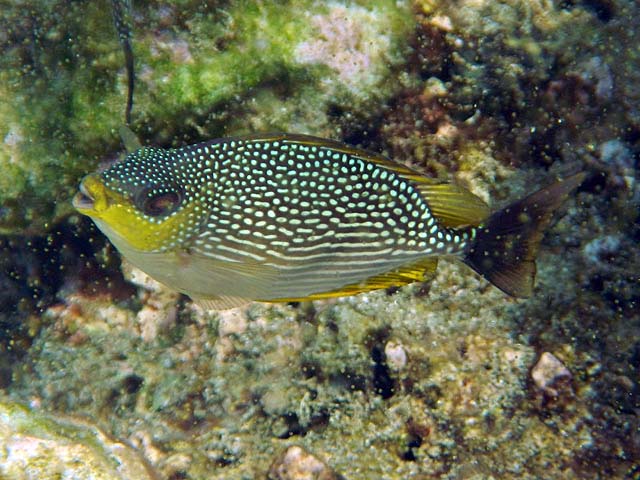 We arrived at the Poda Island Resort a little before 4:00, and the numerous day trippers from around the area were returning to their boats to head back to their resorts. The beach here really is that nice. The cabins, on the other hand, are a little rustic. The floors are covered with off-white tile, which helps with faster drying, but we only have electricity from 6pm-midnight and 6am-8am, which makes cooling and recharging a challenge. Also, during the dry season, the well water is somewhat saline. I haven’t done a careful comparison with seawater, but it could be close. Still, even a salty shower in the dark can help ease the transition from snorkel gear to clothes.

I visited Sun’s cabin for a little happy hour. My cold is better, so it seemed time to resume the tradition. We didn’t have any snacks today, just whiskey on ice with soda water or still bottled water. Perhaps that’s why I got just a little too happy. Still, I managed to get to the dining room on time.

Garlic squid, spicy coconut soup, slices of pork stir-fried with chillies, kua kling made with ground chicken, and mixed vegetables were okay; nothing too exciting. Kasma wasn’t feeling well, so we had a surplus of food. Although I ate valiantly to make up for being one short, much of it was in vain: I spent many of the next several hours visiting the bathroom. Whether it was the boat ride, the sun, the whiskey or the meal doesn’t really matter. It’s over now.

We would spend most of the day snorkeling around the Phi Phi islands. We fueled up with some Pad Thai (the noodles were overdone and sadly floppy, while the sauce was too sour; not a good effort) and headed down to the beach to meet our little speedboat.

Luggage wagon on the beach at sunrise, Koh Poda

Bird fishing on the beach at sunrise, Koh Poda

The sun peeking through distant clouds, from Koh Poda

During the course of the day, we snorkeled at five different spots, including Mosquito Island, Maya Bay (home of “the Beach” from the movie of that name), and Ling Bay. Sadly, I lost my sunglasses at the last spot. I’m still not sure how it happened, but looking down through 40 or 50 feet of dark water gave me little hope of finding them. It certainly isn’t good to destroy or lose a pair of prescription sunglasses on nearly every trip to Thailand, but if that’s all I end up losing, I’ll get over it. 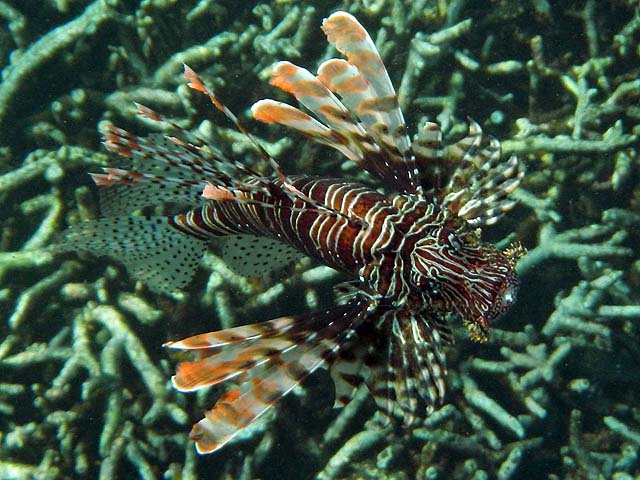 I skipped happy hour today for obvious reasons. On the way to the dining room, we saw hundreds of bats flying over the island. They looked like birds; huge wings. They weren’t stopping to eat our insects, so they must have some better place in mind.

The resort got its twice weekly food delivery today, so we had a fresh fish: a tender steamed barramundi. We also had stir-fried squid, a salad of squid and shrimp with a spicy lime dressing, fried garlic pork, morning glories sauteed with garlic, hot and sour soup with shrimp, and a green curry with chicken and Thai eggplants. I think the salad was the least flawed; apparently it’s tricky recruiting a great cook to a remote island with saline water where the clientele mostly order pad Thai and cashew chicken (that’s what they had at the other table tonight).

Today is an unstructured day, other than mealtimes. We can snorkel the local reef (this involves competing with day trippers and possibly dodging boats), explore the local wildlife (birds and monkeys), or relax in air conditioned comfort and use the free wi-fi. Oh wait, that third option was somewhere else. Other than basic photo card backups, computing here is pretty limited.

Seabird hunting on the beach at dawn on Ko Poda

Seabird landing in the surf at dawn on Ko Poda

We started with a fried noodle breakfast involving chicken, Chinese broccoli and wide rice noodles. Certainly could use a little sugar. High tide is around 9:20 and low tide around 3:15, so I tried two visits to the reef: 11am and 2pm so there would be more variety. The water was clearer in the afternoon, but the sun was behind the clouds much of the day. Still, swimming through a million anchovies and photographing eels’ teeth beats a paperback any day. 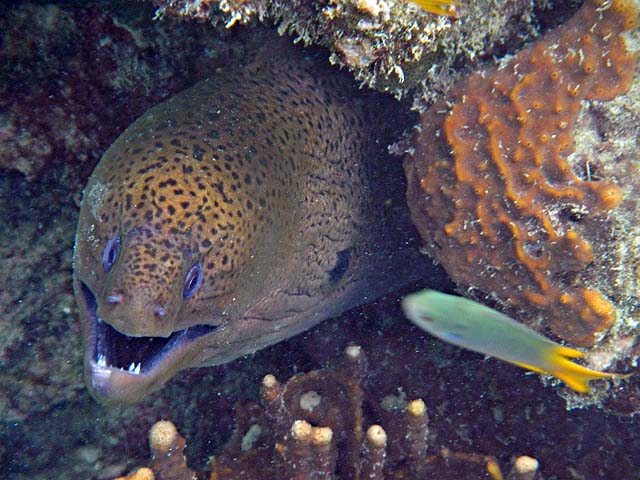 For dinner, we tried barracuda with garlic. The firm barracuda actually was purchased for a large party of Swedes, but some of them canceled, so we got a taste. This supplemented and contrasted with our tender steamed barramundi. I think we made up for not having fish the first night. Grilled pork, stir-fried squid, red curry shrimp, mixed vegetables, and “bland” soup completed the set. Not bad.

Tomorrow we will check out and take an overloaded longtail back to Krabi for good food and freshwater showers. Only three nights left before we depart Thailand, so it’s time to think about last minute purchases.

One Response to “Another Beautiful Island”