While there were too few guests for the Jansom Hot Spa Resort to lay out a lavish breakfast buffet, we did have our choice of a rice or noodle plate. I had spicy chicken with Thai basil and a fried egg to start my day. That and several cups of Lipton tea would have to keep me going until lunchtime.

Speedboat on a Mission

Upon arrival at the pier, we placed our lunch order and had our bags marked with a lime green ribbon. The word “ferry” implies a large craft, but its role has been replaced by one or more speedboats to better match the number of seats to the number of passengers. Our ride was somewhat bumpy and at times involved a bit of sea spray, but it was indeed fast. Upon arrival, we dropped our bags in our cabins. The wooden structures feature a main room with two twin beds, and a bathroom with a wet floor, since there is nothing to keep the shower water from flowing around the tile floor (certainly gravity doesn’t help, because the drain no longer is the lowest point). The screen on the sliding door didn’t appear to provide much security, so I locked the sliding door, reducing ventilation to the already stuffy cabin. Hopefully that can be addressed later.

Back together again, we cracked open our box lunches of turmeric chicken and rice, a Southern staple, and enjoyed a piece of fried chicken on the side.

When recounting the beauty of the underwater world, it is easy to forget the inconvenience involved in viewing and documenting it. In addition to the obligatory mask, snorkel, fins, swim suit, and sunscreen, there is the rash guard (for upper body protection against sun and stings), sunglasses for the boat ride, underwater digital camera, GPS recorder, and bottled water for recovery. Obviously not all of these are strictly necessary, but that’s how I roll.

Ao Mae Yai (Mae Yai Bay), is an expansive coral reef with a wide variety of fish, located reasonably close to the park pier by boat. Our longtail boat, powered by an occasionally sputtering diesel engine, provides shaded seating on hard wooden boards. Underfoot, a layer of loose boards runs from front to rear. They can be picked up to look for items that may have slid down to the bottom of the boat (such as flip flops), but one must step carefully to avoid a mishap.

Despite overcast skies, snorkel conditions were quite pleasant at this reef and a second spot nearby. It only took about 10 minutes to remember how to avoid water leaking into my mask, which always is problematic when you have a mustache. 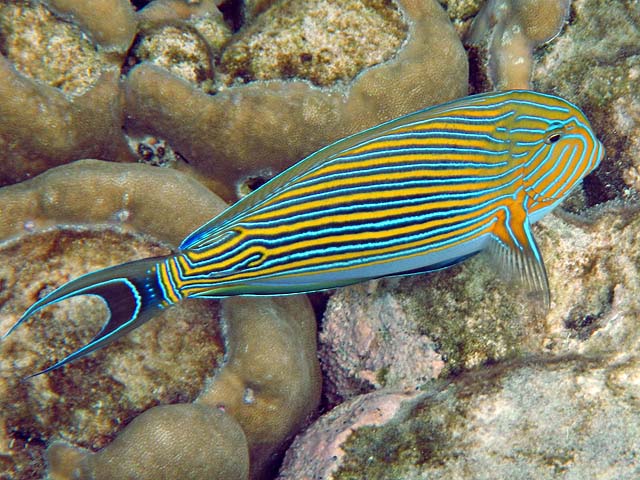 Upon our return, we climbed the stairs to our cabins for a nice hot shower. Oh wait, there is no hot water here, and whatever warmth is supplied by the sun has been used up by those returning earlier. A quick chilly shower will have to suffice. Extra effort is required to avoid stepping on large ants exploring the bathroom floor; perhaps I can dissuade them with some kind of chemical.

Electricity becomes available at 6:00pm, so there is time to start up all the chargers before dinner, and fire up the fan to help air out the hot cabin. After 10:30, the A/C outlets and most of the lights are disabled. By flipping a large switch, you can run the fan and the bathroom light for the rest of the night (until 6:00am or a bit later, depending on the park’s discretion). Not convenient when one keeps passing out from heat and fatigue.

Park dinners are somewhat notorious for a large number of squid dishes, but this first night, we see only a bit, in a crystal noodle salad with shrimp and squid (crystal noodles are mung bean threads that become transparent when cooked). A steamed fish with a garlicky dipping sauce is the star, while stir-fried chicken and a hot and sour soup with fish play supporting roles. The park served mostly ripe pineapple for dessert, and we supplemented that with confections from Hua Hin.

On our first full day in Koh Surin, I awoke with a headache. I tried a wide variety of remedies, from caffeine (bottled green tea) to sugar to ibuprofen. Even my pre-snorkel Sudafed didn’t seem to help. I began to suspect that I was suffering a little bit of insecticide poisoning, since I had slept under a sheet I treated with permethrin, commonly used to treat clothing. I didn’t have the classic symptoms of dizziness and nausea, so a low level case at worst. I would soldier on.

Our meal plan provided ABF — American Breakfast — but probably not one anyone back home would recognize. There were three slices of white bread, which could be toasted on a grill over hot charcoal. Then there were what pass for breakfast sausage in Thailand: the halves of three boiled hot dogs. Finally, there was a sunny-side-up egg, and a few slices of tomato and onion. An egg sandwich with white pepper and Sriracha sauce would have to hold me until lunch.

The water was a bit rough, and the current at our first stop was too strong, so we motored around to Ao Mai Ngam (Mai Ngam Bay), which offers coral at various depths, with increasing amounts of sand as you near one of the few beaches where camping is permitted. We spent a good deal of time here, spotting the timid and elusive Oriental Sweetlips (that’s a fish) among other local species. 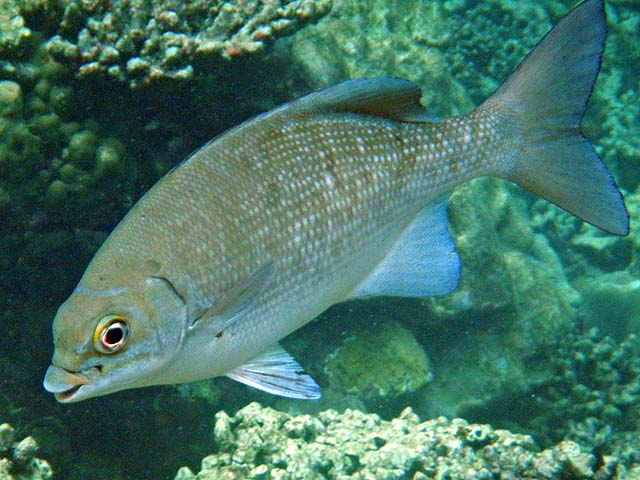 Park catering treated us to a pleasant soup of pork meatballs, cabbage, tree ear fungus, and was that soft tofu? The fish, fried as dry and flexible as a board, and the sweet and sour chicken were disappointing. The stir-fried squid and shrimp had a more intriguing sauce, but a somewhat floppy texture. The sliced pineapple provided a sweet ending.

We were disappointed to learn that monkeys had broken into Kasma’s cabin and stolen our bananas and some of our other precious snack foods. I checked my cabin to see whether I had been hit (for my squid-flavored chips, perhaps), but the lock on the screen door had held and the other screens seemed secure. We departed for our afternoon spots with a little less potassium than usual.

Our longtail driver took us South around the second largest of the Surin islands, to Koh Torinla (Torinla Island). I remember my first snorkel here as being like Finding Nemo. The coral is not as picturesque, but there still are plenty of fish. And a few black tip reef sharks, which tend to cruise the lower depths and are quite difficult to photograph. Due to the current, our range was limited and we resumed at nearby Ao Pak Kaad (Pak Kaad Bay). At one point, a school of barracuda shot into view, but too soon (before I could zoom the camera), they were gone. 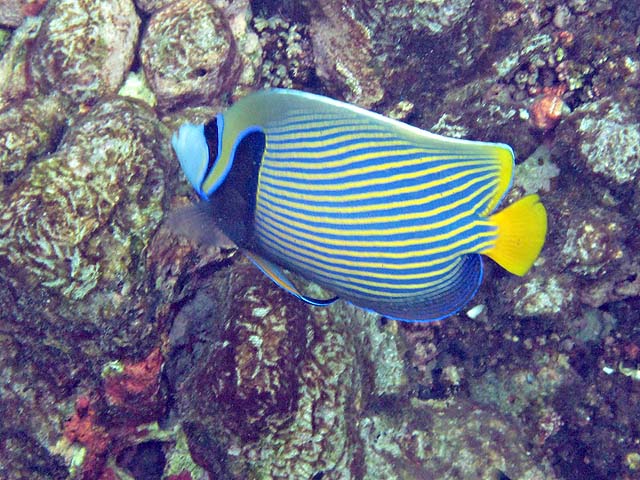 At dinner, we learned that two more cabins had been hit by marauding monkeys. At one, they threw the insect repellent outside and spilled the ibuprofen all over the floor. They apparently judge more by taste than appearance, leaving bite marks in various unexpected places. I was lucky that the screen on my louvered windows did not push in all the way, or I might have lost some things. Increased vigilance will be required.

Dinner, meanwhile, brought a chicken soup, another very crispy fish, tender slices of squid lightly pan-fried and paired with a garlicky spicy dipping sauce, and shrimp stir-fried with carrots and baby corn. We seem to be missing green vegetables, and we aren’t counting the under ripe pineapple. Hopefully tomorrow will bring better meals.

I was disturbed to find my bathroom filled with mosquitoes. Mosquitoes on the walls, mosquitoes in the air; mosquitoes everywhere. It wasn’t the kind of place where one would feel safe on the toilet, much less taking off glasses and washing up. So I did what Chuck Norris would do and smashed them on the walls. These were very slow bugs, so although it took a while, it wasn’t difficult. As I left the cabin for breakfast, the ants starting moving in for the bodies. Bleah.

One ABF was enough, so Kasma special ordered for today: chicken with Thai basil and a fried egg over rice. Just enough to get us going. The sea looked calm, so we headed North to Koh Stork (Stork Island). As we left the protected bay, the waves picked up. Apparently there was a storm somewhere; we got a good dousing of sea spray, but no one lost their breakfast. There were some starfish here, but since we were limited to the protected but more boring side of the island, and the park had closed nearby Ao Jaak after last year’s coral bleaching event, we headed back toward the park headquarters and stopped at Ao Chong Khad (Chong Khad Bay). There were several pipefish here, related to sea horses, and at least one immense old puffer fish. Nearing the boat, I saw a large jellyfish swimming well below the surface. I dived for a photo, holding my breath for what seemed like a painfully long time to get something grainy and green. When I got on board, Michael showed me a perfect photo of the same jellyfish, which had been close to the surface not long before. Oh well, timing is everything. 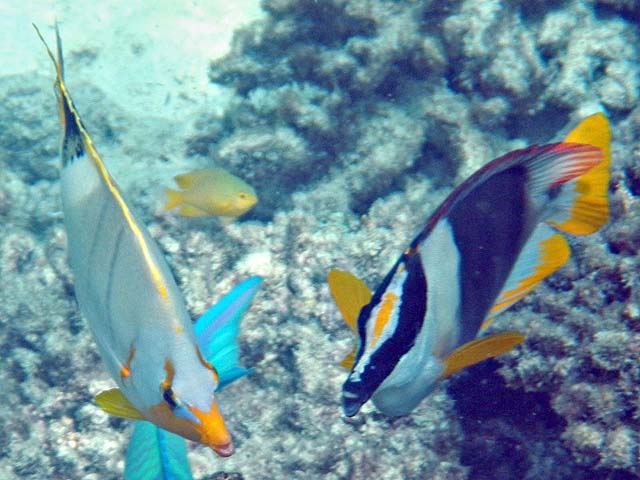 Fried fish, again?! At least the rest of our lunch was different: a slightly medicinal-tasting chicken soup with mushrooms, carrots, and daikon radish; squid in sweet chili sauce, served in an omelet; and chicken with a nice red coconut curry. We are really starting to look forward to meals back on the mainland.

After lunch we took a break from snorkeling and visited the Moken village, a group of closely spaced houses on stilts where the chao ley (sea gypsies) were resettled after the tsunami. They sell little wooden boats and little baskets to tourists, but their main living still is made from the sea. Their beach was unbelievably hot in the still air, so we couldn’t wait to get back in the water.

We tied up to a buoy in nearby Pineapple Bay, since the fabled Turtle Bay was closed after the coral bleaching last year. I didn’t see any turtles, but there were a few reef sharks, a couple of spiny lobsters, and a number of old groupers with bad teeth. 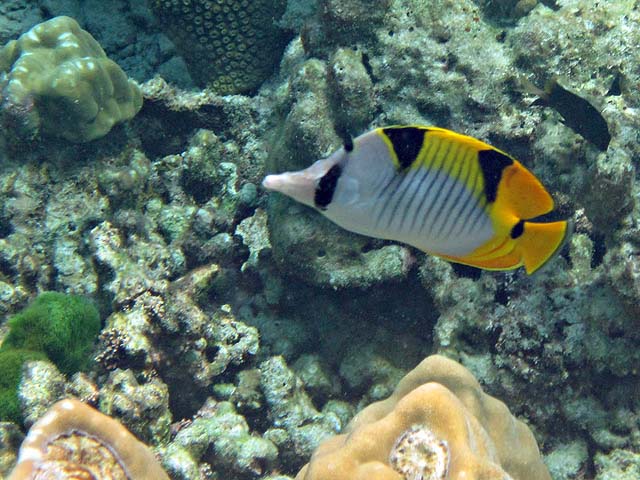 For our last dinner on the island, we switched back to steamed fish, in this case topped with some sour vegetables. Chinese broccoli with Thai oyster sauce, a sour curry with chunks of fish and thick slices of bamboo shoots in a potent broth, and a salad of shrimp, squid, and white tree fungus, rounded out the set.

Tomorrow morning we hope to hit one last spot before catching the ferry to shore. We will spend the evening in a beautiful resort with 24-hour electricity, hot showers, great food, and a karaoke machine. Made all the more sweet by three nights of deprivation.