My route to Thailand takes me through Taipei, Taiwan. On previous journeys, I have passed a few pleasant hours in Taoyuan airport’s Terminal 2 eating dumplings, having my hair washed, and riding the massage chairs. This time, one of the options for redeeming my miles provided an eight hour layover that promised enough time to run into town for even tastier dumplings. As if this weren’t complicated enough, would attempting to vlog the adventure bring me to a whole new level of crazy?

My return to Thailand begins in the International Terminal at SFO, where there is an exciting new lounge to explore. My 90,000 miles cover not only business class seats on both legs of the journey, but admission to the recently opened United Polaris lounge, said by some lounge reviewers — yes, that is a thing — to be one of the best lounges in the country.

But before I could sample any luxuries, I had to run the gauntlet of airport security. For some reason, I didn’t have TSA Pre-check on my boarding pass, so I had to put everything in multiple bins, disrobe, submit to millimeter wave inspection, etc. Definitely didn’t get my $85 worth tonight. Could this be related to the government shutdown? I blame Trump.

The Polaris Lounge is very large, so although the work cubes in the area with the most food were all full, I was able to find a cube somewhere else. Unfortunately, dinner service ends at 9:00pm, so the selection was limited to finger sandwiches, salads, eggdrop soup, and the usual United Club snacks. Disappointing. How about the shower rooms? Not bad, but no combs and the oddest fragrance in the soap and shampoo. Even if it is quite a nice lounge by United’s standards, I wouldn’t call it world class just yet.

During my visit, I discovered that in my haste to pack all my gear, I forgot a little cord that is critical for my wireless microphone system. So I’m afraid that vlogging will be limited for the foreseeable future. Maybe I can share a few random video clips later. Perhaps they will be improved by having less of my face in them.

Around 12:30, the EVA 777 lifted off for Taipei. I think this is my first flight in Royal Laurel class, and I’m looking forward to a good meal and good sleep. One of the strange things about the seat layout is that the lie-flat seats are angled away from the aisle. I felt my frequent interactions with the flight crew were a bit more impersonal as a result, but they’re probably used to it by now.

Dinner service was excellent, especially the lobster appetizer (the scallop was meh) and the entree of three large grilled prawns in a puddle of green curry. 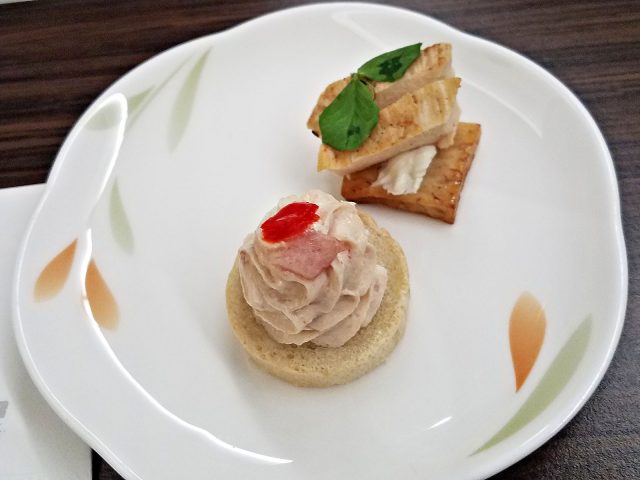 I probably shouldn’t have had the wine; either that, or caffeine deprivation, led to a 10 hour headache. With enough sleep and ibuprofen, it eventually faded. If you don’t find flying frustrating enough, you can worsen it by getting the 24-hour wi-fi package that connects to websites at dial-up speed (if you remember those days). At least I was able to take care of a few things that I otherwise would be handling in Taipei or Bangkok, and I probably got 5-6 hours of sleep if you add it all up.

Before arrival, breakfast was served, and as always on EVA, I ordered the rice porridge. It was fancier in business class, with more side dishes. I wasn’t able to finish the whole chunk of stinky tofu, as I found it hard to get the taste out of my mouth. More tea, please? Speaking of tea, they brewed the Ti Guan Yin best; the oolong was over-extracted and bitter, while the Jasmine lacked fragrance.

My weather app promises a high of 71 degrees today in Taipei, but when we landed around 5:40am, the local temperature was a cool 60 degrees. Not so different from back home.

At immigration, they pointed to the “where are you staying” blank that I had lined out. I explained that I had a layover, and the agent wondered if I really wanted to go into town. He had to agree with my assessment that it would be pretty boring to spend 8 hours in the terminal. I hopped on the Taoyuan Metro (MRT) express train to Taipei Main Station, where I arrived around 7:20. Then after a 5 minute walk, I caught the Taipei Metro red line (also known as MRT) to the Chiang Kai-Shek Memorial station.

My first stop is Jin Feng Braised Pork Rice which, as I’m sure you guessed by now, specializes in Lu Rou Fan, or braised pork over rice, a popular breakfast choice in Taiwan. With glowing reviews on TripAdvisor and Yelp, my main concern was eating too much. After all, this was to be just a snack before brunch.

Conveniently located a short stumble from the station, I nevertheless got spun around. The station maps and the Google Maps app do not seem to agree on which numbered exits lead where, so it was almost their 8:00 opening time when I arrived. For me, the lack of English signage didn’t make it any easier to find. I noticed that many guests had claimed tables and were holding yellow ordering slips, so I followed suit. These slips are printed in Chinese, but there’s a bilingual menu at each table. You simply match up the prices and then compare the characters. And then cross your fingers that you got it right.

My medium-sized bowl featured rice topped with a modest serving of minced pork belly, and a pickle. The rice was totally saturated by melted pork belly fat, which challenged my chopstick skills — there are no spoons on the tables, or napkins for that matter — but I managed to get nearly every grain. From reading recipes for the dish, I was hoping for a more pronounced five spice/star anise flavor, similar to the famous Taiwanese beef noodle soup. Instead, the dominant note was salt. The braised chicken egg was deeply infused with the same cooking liquid, and it too could have used a spice boost. At least the boiled vegetable helped offset the saltiness. Overall, I’m not sure it was worth the trip.

I have to confess that my appetite was partly ruined by the realization that I had left my underwater camera on the Taoyun Metro when I exited at the Taipei Main Station. I’m still learning where I’ve stuffed everything in my backpack and camera bag, and made the error of placing it on the seat and failing to repack it. What is it they say about those who forget history? It was in June 2010 in Taipei when I left an underwater camera in the back set of a taxi, the only other time I’ve made a similar error. To make a long story short, although Lost and Found was closed until noon, there was a phone number to call, and they reported a similar camera turned in back at the airport station. I cut my adventure short and headed back and claimed it. Thank you to everyone involved in making that possible. Someone is looking out for me, or teaching me a lesson, or both.

Of course, losing my camera stressed me out too much to return to Din Tai Fung for their xiao long bao, commonly known in the U.S. as Shanghai dumplings or “soup dumplings.” While all xiao long bao feature piping hot broth inside their elaborately pleated wrappers, there are differences among makers, from the dough used in the wrapper to the flavor of the meatball. Perhaps it is best simply to treasure my happy memories of my three meals here when I visited Taiwan with my father in 2010. My regular haunt for excellent XLBs, Chef Zhao Kitchen in Palo Alto, reigns as my current favorite. A re-match will have to wait for my next visit.

Security and immigration were a bit slow, but soon I was wandering the halls of the airline VIP lounges in search of Thai Airways, the carrier for my flight to Bangkok. It is listed on their website, but it is nowhere to be found. Instead, there is a sign pointing to the Plaza Premium Lounge. Small and noisy, with no shower, it’s not very luxurious. But their kitchen redeems them: the broth of their Taiwanese beef noodle soup is delicious (the beef probably could braise for another hour to become more tender), their eel fried rice is surprisingly good, the steamed fish fillets with ginger and scallions taste fresh and have a nice texture, and even a mysterious disk of chicken in a clear liquid — incongruously labeled General Tso chicken — was tender and pleasant. It’s a reasonable place to catch up on the blog.

My Thai Airways flight is my first in a Boeing 787 “Dreamliner.” The seats in “Royal Silk” business class have the same layout as my flight over, but unlike my previous flight, which had nothing to see out of the window except city lights at take-off and landing, this flight should afford us a daytime view. Upon further inspection, EVA’s seats are better: they have a leg rest for a more comfortable intermediate position between sitting up and lying down.

Our meal is a green curry with beef that is decidedly unlike the one served back home, with only the barest hint of sweetness and a strong green chilli edge. It’s a good warm-up for spicy meals to come. The fact that it was served with garlic toast and followed by a cheese course shows how eclectic (schizophrenic?) airline menus are these days. After a dessert of Thai custard with a distinct onion/shallot flavor, we received wi-fi vouchers and the lights were dimmed. Some surfing, some napping, and soon we were descending through an orange haze to Suvarnabhumi airport in Bangkok. My month in Thailand has begun!

2 Responses to “Two Flights and Eight Hours in Taipei”