Phuket Island is one of Thailand’s premier tourist destinations. We have booked a Villa on a hill overlooking Surin Beach, a relatively quiet town a good distance from the island’s sleazier spots. But first, we have to get there, and that presents the challenge of squeezing my essentials for four nights and gear for a snorkel trip into a single bag. Better get to it.

One of the nice things about traveling on a Monday is that it is still Sunday in California, so we generally don’t have to contend with emergency work emails. But somehow I always underestimate the time required to get ready to leave. The checkout process at the Sheraton, while friendly, is none too speedy. Eventually our payments were processed and our extra bags piled up at the bell desk to be held until our return. We’re ready.

I booked a van to the airport with Thai Happy Taxi, and we made it there around the time I expected. On the other hand, the lines at the Bangkok Airways self-check-in kiosks were surprisingly long and slow. Although we were scheduled to depart in about 90 minutes, I discovered that I could use online check-in, so I did that and moved over to the long bag drop line (the economy fare includes one checked bag). Eventually we got all our bags on board and were ready to face the security line. Fortunately, that one moved more quickly and we had a little time to check the shops around the boarding gate for souvenirs or snacks before boarding.

Other than a 20 minute delay, our flight was smooth. As we approached Phuket, we were flying so low it appeared we might be landing directly on a beach. Fortunately, we used the runway, and after picking up our bags, we found my name on a sign outside. Within moments we were on board a van to the villa. We did ask the driver to stop at a big store so we could pick up some snacks, beer, wine and whisky. At least, that’s what I told Google Translate to ask. We ended up stopping at a 7-11, which is a reasonable choice for these items.

Our villa is in the Ayara Surin development, a gated enclave on a hill overlooking the Southern end of Surin Beach. There is a hotel with an entrance near the foot of the hill, and a road up to the villas. A guard booth on the side of the road a few doors down from the villa provides comfort that your possessions are pretty safe up here. (The guards later let me walk up and down the road several times without ever asking me what I was doing there. I guess I don’t look very dangerous?) 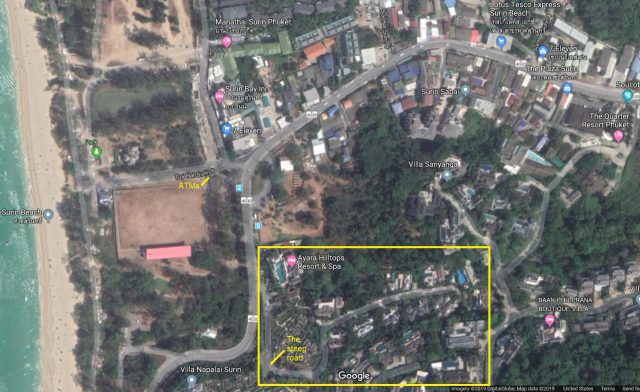 When we arrived, we were greeted by Mrs. Deng and members of her team, who were our house managers. She helped us find our way around and we set about the serious business of deciding which rooms to take.

The villa, especially on the main level (up several flights of stairs from the road), is spectacular. Directly outside the front doors is an infinity pool, and at each end a covered, open-air sala featuring comfortable seating. Two master bedrooms have sets of doors leading into the house as well as out to the patio. Everything is decorated beautifully. The other three bedrooms are on lower levels. The largest is directly below the pool, with doors closest to the street. Another is along the stairs between the lower bedroom and the main level. The fifth room is down a set of stairs on the opposite side. It features a Thai-style combined shower/toilet room that I’m used to from numerous other accommodations in Thailand, but which I didn’t think my travel companions would enjoy, so I took that one. You can find professional photos of the villa in the Airbnb listing. (It also is listed for sale by CBRE. Would I buy this place? It’s tempting!)

Having dropped our bags in our rooms, we considered late lunch options and ordered pizza for delivery. What about dinner? Our house managers could cook Thai food for us in our own kitchen. Now relaxing into the convenience, we needed to let them know what we would like. They offered several cookbooks with beautiful illustrations to choose from, but it was simpler to take their suggestions this time; we could be more ambitious tomorrow. And would we like massages by the pool this afternoon? Yes, please. Before we even finished our pizza, six masseuses arrived to do the job. Most of us were laid out on mats under the shade of the salas, covered by elaborately printed fabric. Some grunting and groaning may have been involved, as I hadn’t had a full body Thai massage for quite some time.

I wandered down the hill to try for some sunset photos before dinner. It was difficult getting a good angle over the resort. Kids on the soccer pitch provided a classic foreground image, but I couldn’t linger until they started play, it was time to eat.

When we convened at the dinner table, the food looked very impressive. Hot and sour soup with shrimp (tom yum kung), green curry chicken, stir-fried morning glories, green papaya salad, and pad kee mao (drunkard’s noodles) glistened beautifully. We all had several portions. It was very tasty, but a bit tame. I requested that they make the standard Thai table sauce of thinly sliced Thai chillies in a bowl of fish sauce (prik nam plah). This helped perk up some of the dishes, but does add a lot of salt. It’s understandable that they wouldn’t want to make it too spicy, but I’m confident we can handle a lot more than this. Maybe after they get to know us better? 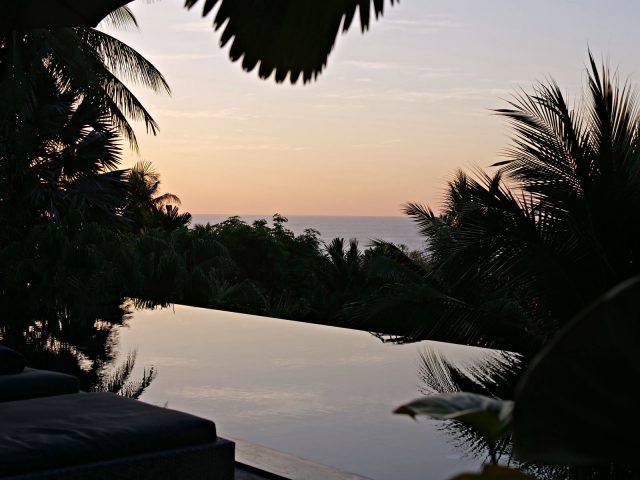 Sunset View over the pool at our Ayara Surin Villa 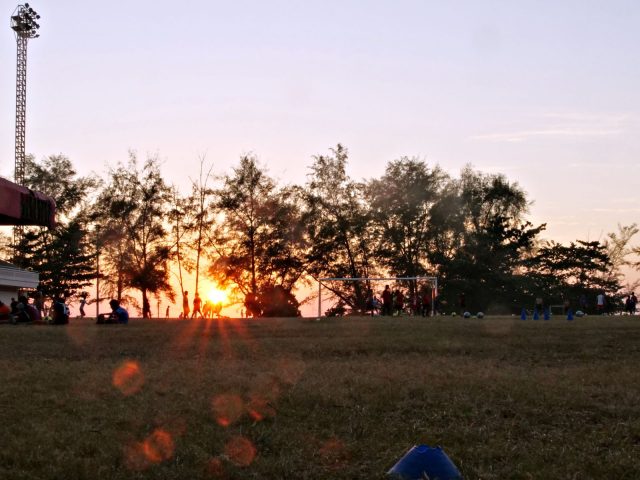 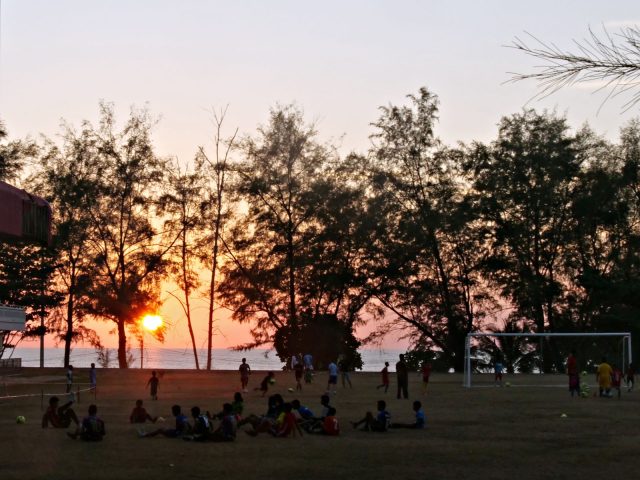 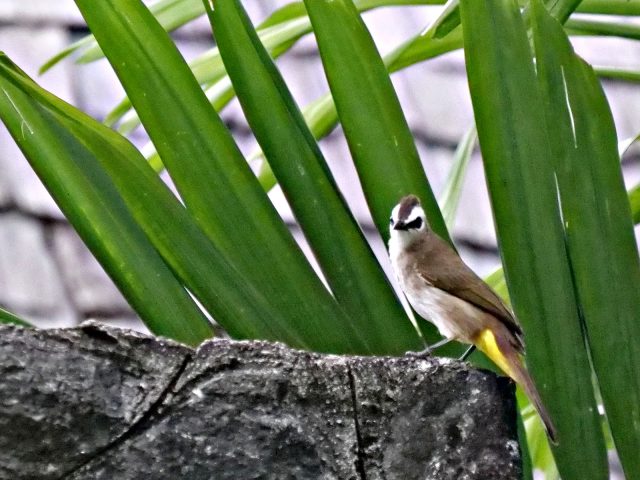 Yellow-Vented Bulbul on the road to our Ayara Surin Villa 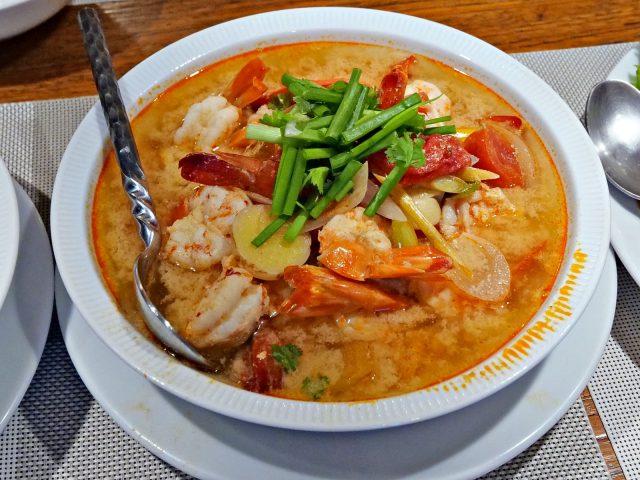 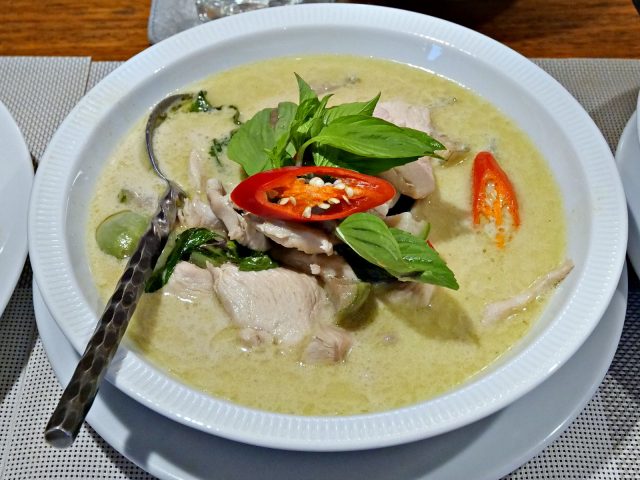 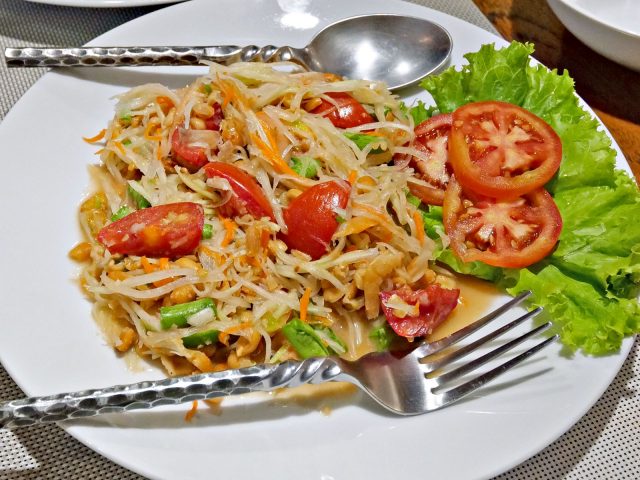 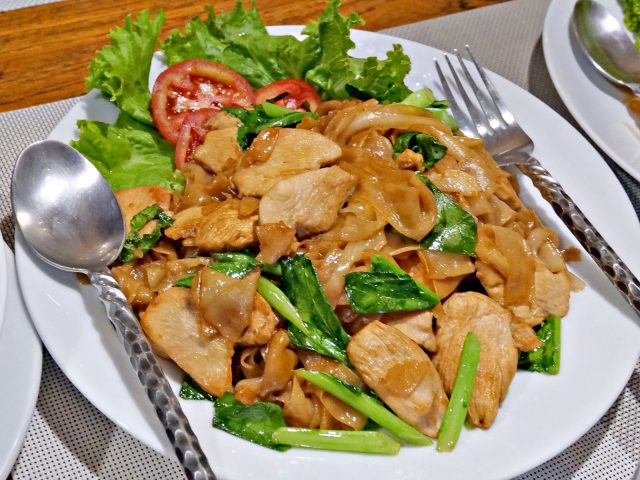 Before leaving, our staff took care of the dishes and we set a time for breakfast. I could get used to this!

Tomorrow, Geneva and I have a snorkel trip to the Phi Phi islands. I’ve only been there with Kasma, so it will be interesting to get a different perspective. The winds are supposed to be calm, so fingers crossed that our speedboat ride won’t be too bouncy.