Kasma has been bringing groups to the Southern end of Koh Lanta for a few years now, to put some prime snorkel spots a 30-60 minute boat ride away. The Anda Lanta is a luxurious little oasis on our trip. Its lovely views, ludicrously large beds, ample porches with drying racks, strong air conditioning, hot showers, and easy breakfast buffet make life here a breeze. Kasma’s driver Sun says coming to Koh Lanta is like coming to a foreign country because no Thais visit here, but this time there are at least two exceptions: due to a cancellation by a trip member, there is a room for our drivers Sun and Aex so they can get a closer look at how foreigners vacation in Thailand.

Nakhon Si Thammarat has been good to us. For breakfast, we stopped at a large Kopi restaurant, which took over the location of a place where we used to have lunch. Gone are the antique coconut graters, and anatomically correct statuary identifying the restrooms; the men’s is now marked with a photo of Elvis Presley, and the women’s, Marilyn Monroe. Sentimentality aside, I enjoyed the unctuous cartilage in the “soft rib” soup, the hot tea, and indulgent fried bread with pandan-scented sweet dipping sauce.

As we headed West, we stopped at Wat Thai Noi, a temple with a huge reclining Buddha. Dedicated to a famous local monk, Portan Klai, everything here is sparkling clean and bright. We took our time snapping photos before packing back into our vans. 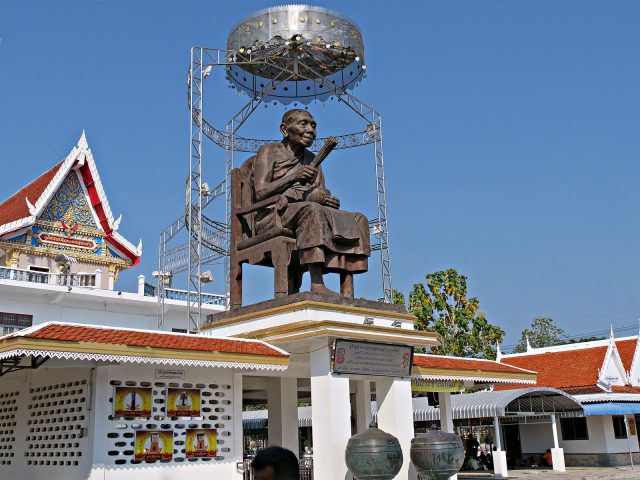 Chapel at Wat That Noi in Nakhon Si Thammarat

When we reached the coastal highway, we stopped for lunch at the same place I remember eating in 2017. This time, I was able to enjoy a full bowl of its delicious duck noodle soup. We added on deep fried slices of banana and sweet potato to increase the potential for napping through the rest of our drive.

Koh Lanta is accessible by car ferry, onto which they load an impressive number of tourist vans for the extremely slow 1.5km journey from the mainland to the island. From there, it takes over 45 minutes to drive through local towns and tourist areas, past lodging great and small, to the hilly Southern end of Koh Lanta Yai where we would, at last, be met with cool towels and a fragrant and refreshing “welcome drink.”

The Anda Lanta’s rooms are spread over several buildings on a hillside, and this year I am in a room seemingly positioned for easy access: it is the first room in the building. Was this to help make sure I’m on time? I can’t complain; and I still won’t be on time. After some time to unpack and put on nicer clothes (and bug spray), we departed by van for dinner.

The beach at the Anda Lanta doesn’t have a direct sunset view, so we headed north to Ban Kantiang beach for a little strolling, photography, and dinner. Actually, several of us were too tired to stroll, so we let the sun sink into a better position for photos while we investigated the happy hour offerings at the beachside restaurant Same Same But Different. Service was not very speedy, so it was only one mojito later when we finally got our sunset and could turn our attention to eating.

Same Same was created and is run by the owners of Ruen Mai in Krabi, where we will enjoy several delicious dinners. This outpost is definitely Different: more touristy, with milder spicing. Still, we very much enjoyed our fried chicken served with green papaya salad; grilled eggplant salad in a tangy lime-based dressing enriched with a drizzle of coconut cream; coconut soup with chicken; deep-fried fish with rich choo chee curry; tamarind prawns; and massaman curry beef. For those keeping score, that is a boatload of fat calories. And tomorrow, we intend to swim them off.

The Anda Lanta’s breakfast buffet features dishes targeted to European, Chinese, and Thai tastes, from omelets (yes, please) and pastries to fried noodles and exotic fruits. I was, of course, running late, but our boat drivers were running later, so I wasn’t the one who ended up getting in trouble.

The longtail boats here have a different design from the ones we used at Koh Surin and on the lake. Instead of having several short benches across the boat, there is a long bench along each side, with a wide open area in the middle. This makes it easier to move around the boat, and chat (well, yell over the din of the engine). On the hour long journey to Koh Rok, I amused myself by trying to photograph the seabirds that would occasionally zip across our path.

Koh Rok consists of two islands with a narrow passage between, and a large protected area renowned for its easy snorkeling. As the ocean was reasonably calm, we started with a spot between the two islands where I remember once following a giant moray eel along the edge of the reef. Since then, the park has erected a rope line along which numerous boats were tied up. The congestion made it difficult to get to the edge of the reef, so I gave up my quest to repeat that adventure, and photographed the abundant fish right in front of me.

Before we could get to our second spot, we were intercepted by a park enforcement boat and had to detour to park HQ to buy tickets. This involved tying up to a pier composed of floating plastic containers that was experiencing heavy boat and foot traffic, as day trippers and perhaps some campers headed to the island’s white sand beach. I definitely do not remember this many visitors on past trips; our secret is out.

At our second spot, I found an eel, not that he (or she) was trying very hard to hide from me. I wonder what these creatures think when they see a camera approaching them at arm’s length. They probably realize they swim much faster than I do. After getting back to our boats, we had a hearty lunch of green curry, mixed vegetables, and steamed rice before a final snorkel at a third spot.

Upon our return to the beach, it was extreme low tide and a field of rocks stood between our boat and Lanta’s soft sands. This kind of terrain is not well suited to flip-flops or bare feet. I will have to remember some more secure fitting footwear if I return here again.

I invited several people over to help me with my bottle of tequila after we all had a chance to shower and change. We took advantage of the large porch to relax and chat, and taste various Thai drinking snacks, from spicy peanuts with little crispy fried fish to spicy dried shrimp and cashews in a sweet glaze. The snacks wouldn’t last, but it would take several sessions of “Shots at 6” — or as one fellow traveler dubbed it, “Six Shooters” — to finally finish the tequila.

Dinner tonight was at the Anda Lanta, mere steps from the beach, although the sun had long since set so visibility was a challenge. We started with a kind of “salad roll” with a tangy dipping sauce, followed by a tasty steamed fish; seafood also featured in a stir-fry, a hot and sour soup, and a crystal noodle salad. With all the snacking, it was more than enough.

Tomorrow, we will take more fish photos, this time at a closer set of islands where there are caves, chimneys, and other fabled structures I’ve never gotten a chance to see. Maybe this time?

After an even briefer run through the breakfast buffet, it was time to head West. When we reached Koh Ha, the tide was high and conditions were quite wavy, which made it risky to swim through underwater tunnels or even to get too close to the rocky islands. The fish didn’t seem to have it much easier than we did; they often seemed to be struggling as though a giant child were sloshing their fish bowl. We were able to find some interesting sea life, including eels, filefish, large barracudas, shy porcupinefish, and some “survivors” sporting serious wounds. There also were many scuba divers in the water, creating huge columns of bubbles to play with or photograph.

We had switched boats, and ours seemed to have some starter trouble. What we eventually learned was that there was only one good battery between the two boats, which created some tricky situations passing it back and forth in the middle of the ocean. Thankfully, it didn’t end up going overboard. Kasma later related that the drivers’ claims about having cooked our lunches were false — “Southern boys telling lies to tourists” — as she had arranged for the meal in advance with the owner’s wife. They weren’t sea gypsies either? Oh well. At least today our driver got us closer to the beach so we didn’t have to stumble over as many rocks.

Today’s happy hour featured a different mix of guests, and considering our slow progress on this bottle, we’ll have the opportunity for more. Our dinner here at the Anda Lanta featured coconut soup with mixed seafood, a steamed fish, a spicy larb (with pork? chicken?), massaman curry beef, and stir-fried morning glories.

It would be so easy to stay, but we must move on. Tomorrow we head North to Krabi, our last stop in Southern Thailand, for more snorkeling, shopping, and perhaps even a bit of relaxation before returning to Bangkok.