Incredibly, this is the twelfth trip I’ve taken in Thailand with my Thai cooking teacher Kasma Loha-Unchit, and somehow it doesn’t get old. Bangkok and the other places we visit are constantly changing, each group has its own dynamics, and through some miracle, we find new things to eat each time. Let the exploration begin!

The Salil Hotel’s breakfast buffet opens early, and since I had trouble staying asleep, I dropped in at 5:30. The selection is good at this hour, with a variety of Thai, Japanese, and Western items. I had a soft-boiled egg, mini-croissant, mini-omelet, Thai noodles in smoky dashi, and a couple of stir-fries. That should hold me for a while. The tea was pretty dreadful as usual, featuring oversteeped black tea (probably Lipton yellow label) in coffee-flavored/scented water. Fortunately, my room has a kettle so I can dip into my supply of Numi tea bags.

I wandered the neighborhood starting before sunrise. My most urgent errand was bottled water, but I took the opportunity to check the street vendor stalls opening along Soi Thonglor, Sukhumvit, and near the Marriott. I wasn’t able to find khanom krok — delicious coconut milk/rice flour pancakes — this morning; I’ll need to track some down later.

After a bit of email, I headed out to run a couple errands and find a good lunch. I started with currency exchange, which is a slightly complicated topic. The rate offered by the booths in baggage claim — 2,834 baht per $100 bill — was far lower than the 3,006 offered by certain famous exchange vendors touted on the internet. I ended up using the ATM at the airport. Due to a fee of 220 baht, I received a nominal 2,911 baht per $100. However, my credit union rebates ATM fees up to $5 for up to three withdrawals per month, making my effective rate 2,954 per $100 (I think). Either way, this morning I was happy to receive 2,999 baht per $100 around the corner from the hotel (at Twelve Victory). Later, around a different corner, I saw 3,000 baht per $100 (at a different Twelve Victory booth). Either way, this turned out to be a convenient neighborhood for a reasonable exchange rate. I have no idea whether that will be true tomorrow.

Next stop was the Terminal 21 shopping mall, a short ride away on the BART-like BTS Skytrain. In the basement is an outpost of the Gourmet Market, with a stand featuring just the thing for long van rides on twisty roads, my favorite candied ginger from Fareeda Dried Fruits. I also browsed the wide selection of snacks, picking up a salty/sweet/crunchy dried fish snack for later happy hours. In the foyer in front of the market were numerous vendor stalls featuring everything from steamed pork buns to freeze-dried durian. I couldn’t resist the Sakoo Sai Moo, a sweetened filling of ground pork encased in a translucent tapioca wrapper. So tricky to make, so fun to eat. Before leaving, I grabbed a pack of deliciously addictive crispy pork sheets. (Unfortunately, these would be broken into crispy pork bits by the time I got back to the hotel.) 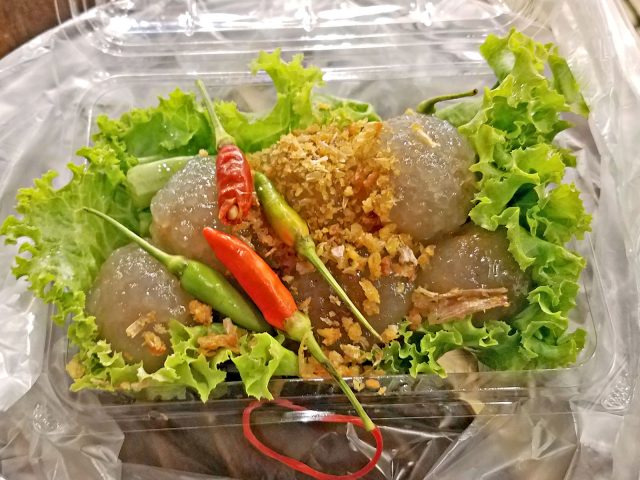 Since Terminal 21 provides easy access to the MRT, Bangkok’s subway system, I headed toward the three new stations that opened in 2019. The Sanam Chai station is closest to the Grand Palace and other major tourist attractions, and the interior of the station has ceiling features similar to a temple. (Richard Barrow has a write-up with photos at Quick Tips on how to take the MRT to Chinatown and the Grand Palace.) I was wandering through the leafy grounds of Museum Siam when some enthusiastic young people urged me (and all other passers by) to check out a special exhibit on Western influences in Bangkok. There definitely is a tension between the preservation of tradition and affordable housing, on the one hand, and modernization and the accompanying gentrification. It wasn’t clear whether the exhibition is meant to weigh in, but at least one sign seemed cautiously optimistic about redevelopment. And I was very thankful for the air conditioning.

I headed over to the nearby Tha Tien pier to catch the Chao Phraya Express river ferry, but due to renovations, there was a long line for a shuttle boat to a different pier. Studying navigation directions, it seemed faster to catch a bus, but perhaps due to traffic, the scheduled buses did not arrive, or if they came by, they did not stop. I ended up walking to the next pier to catch my orange-flagged boat. Finally, it came and we were racing upriver, all in pursuit of a $1.50 bowl of noodles.

Sukothai-style noodles are little known outside of Thailand, but everyone I know who has tried them loves them. Fresh thin rice noodles (sen lek) are classically served “dry style” (haeng), with slices of red-cooked pork, crushed roasted peanuts, and other savory toppings with fish sauce, lime juice, and a good-sized lump of palm sugar. It’s addictive.

Disembarking at Phra Athit, I wandered about 5 minutes to a shop that doesn’t have a transliterated name on its sign, but still might be called Somsong Pochana. After a wait of nearly thirty minutes, my bowl arrived. The sauce was on the sweet side and could have benefited from a lime wedge for balance; instead I added vinegar from the condiment tray on my table. The noodles were nicely chewy, and crunchy fried pork skin (I think) was a fun addition. Even though my bowl was a bit small, considering the slow service, I could not justify ordering seconds. 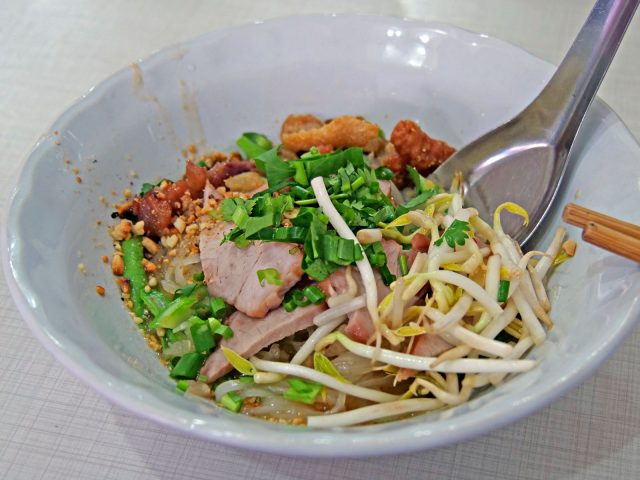 Getting home was mostly a matter of catching the same boat in the opposite direction, and taking it all the way to the Sathorn (Central) pier to catch the BTS Skytrain again. Back on Thonglor, I stopped in to Wadee for a two-hour traditional Thai massage. We climbed the stairs up a few floors to a work area featuring four mattresses on a wooden platform. As the first to arrive, we set up at one end, and I changed into a lightweight top and baggy fisherman pants. My masseuse sat down and began poking and squeezing my feet and legs using her fingers, elbows, and knees. I think the foot and calf massage yesterday was helpful preparation, as those areas were less painful than usual. The thighs and hamstrings were a different story: an hour is not enough time to untie a year’s worth of knots. I was in mid-groan when the another customer was shown to the platform. As our massages progressed to increasingly challenging work on the neck and back, we exchanged subtle sounds of distress through the thin cotton sheet that served as a curtain; I’m not the only one who hasn’t been doing his stretches. When my time was up and I was back in my clothes, there was a cup of herbal tea waiting for me in the lobby. It was a brief respite before returning to the bright sun, heat, and humidity of a late Bangkok afternoon.

After a quick shower, I headed to the lobby to meet our group. We have an even dozen travelers, plus Kasma and her husband Michael, plus Sun and Aek, our two drivers. It was a very manageable size for our two vans as they pushed slowly through the traffic to My Choice restaurant, only a few blocks over. We were ushered into a quiet side room where Kasma reviewed some of our itinerary and trip rules while the waitstaff piled rice on our plates and seven courses began to arrive. First up was a special order of beef tongue in massaman curry. The richness of the coconut milk and tender beef tongue matched well with the richness of the accompanying crispy fried roti bread and tangy cucumber salad. Any visit to My Choice would be incomplete without their delicious long green eggplant salad and winged bean salad. Grilled eggplant is divided into tender, smoky segments, topped with thinly sliced shallots, and dressed with a bracing lime juice-based dressing. The winged beans are sliced cross-ways into small pieces and topped with crispy fried shallots. These two main ingredients are difficult to find in California, but you can make a pretty good grilled eggplant salad with light purple Chinese eggplants instead.

Our spiciest dish was a dry-style Southern curry featuring chicken, Thai eggplants, baby corn, and (wild?) bamboo shoots stealthily coated in a powerful curry paste. A close second was squid cooked “pad cha” style with krachai, strings of green peppercorns, and plenty of chillies. Our coconut soup with mixed seafood had a perfectly creamy texture, and if you finished quickly, the waitstaff would refill your bowl. Finally, we tried a new dish of shrimp “rafts” with a side of green papaya salad. The rafts looked a bit like large shrimp chips but tasted more like crackers, so there is room for improvement. Nevertheless, we finished them, and still managed to find room for dessert. We enjoyed the homemade coconut milk-based ice creams with various bits mixed in. 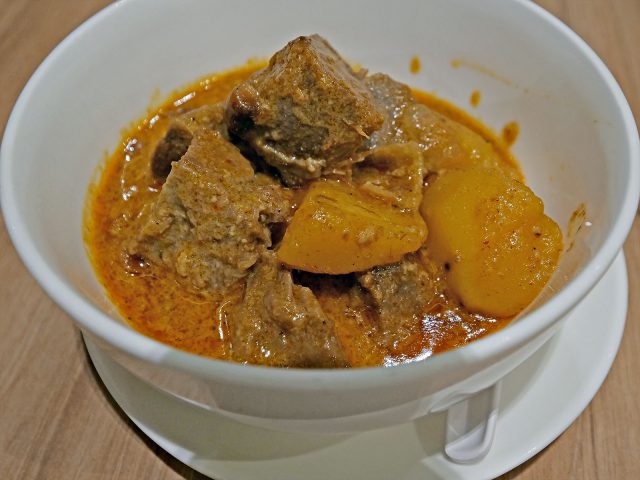 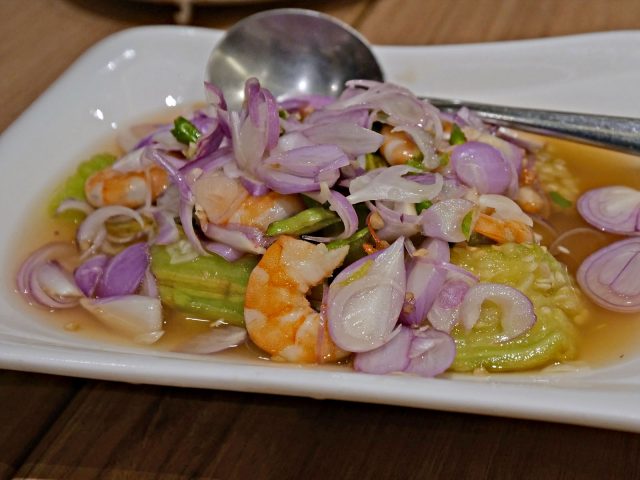 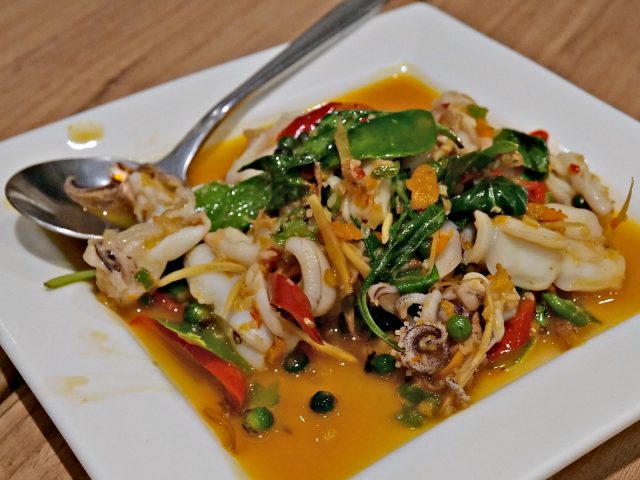 Coconut Soup with Mixed Seafood at My Choice Restaurant, Bangkok 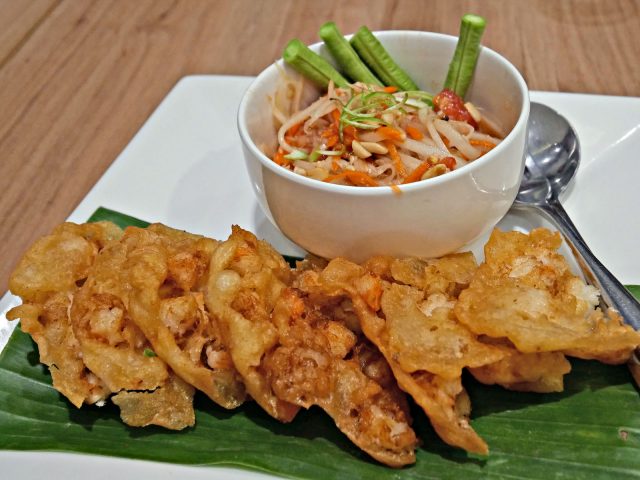 Sadly, we leave Bangkok in the morning, but fortunately not until 8:30 so I’ll have a bit of time to sleep in, and perhaps find the elusive khanom krok vendor.

One Response to “The Dozenth Meetup”