In the Winter of 2016, I joined my Thai cooking teacher Kasma Loha-Unchit as part of the first group to experience the “Northern Frontiers” itinerary. We found beautiful temples, unusual parks, plenty of tasty regional cuisine, new shopping opportunities, and even a tea plantation. Only four years later, Kasma has scheduled her last Northern Frontiers trip, so I couldn’t resist checking in on these spots one last time.

Our itinerary leads through Thai cities and villages seldom visited by Western tourists:

Of course, we also will be eating at least three meals a day, so there will be so much more to the story.

I will be arriving in Thailand 24 hours early to ease the time change (and optimize my airfare). Also, since we leave Bangkok nearly immediately, it provides a bit of time for picking up provisions and having a massage or two.

Although I allowed plenty of time to pack (and shop for things to pack), I hadn’t counted on problems backing up my laptop’s SSD. After two Windows 10 blue-screen errors, I decided not to push my luck. Fingers crossed that I have a laptop for my entire trip.

I caught a Lyft to SFO where check-in was easy and I got TSA Pre on my boarding pass so there was minimal hassle at security. EVA didn’t provide a free lounge pass this time, but I have United Club passes from their credit card so I could pick up a snack and use the WiFi. Chicken noodle soup and cheap Prosecco aren’t my preferred New Year’s Eve fare, but they’ll have to do. No bananas, but there are brownie cubes.

The Miracle of Flight

Business class award seats were in very short supply, so I am flying on EVA Airways in premium economy (Elite) class. We have nicer seats than Economy, wider with more recline, but they don’t compare to a flat bed. At least I was very lucky to have an empty seat next to me so I could use it to charge my phone, for my bottled water and various wrappers, and for extra floor space to park my overstuffed backpack.

Premium Economy should in theory have somewhat better food than Economy. I considered ordering a special meal in advance — the Seafood meal is said to have a generous portion of shrimp. But instead I rolled the dice with the standard menu. The beef bulgogi dinner was delicious, as was the congee breakfast with century eggs and a generous topping of fish floss. But the mid-flight Jimmy Dean Ham, Egg, and Cheese Croissant also was tasty, so perhaps there is just something I’m liking about airplane food today. MSG??

Coming into Taipei, my first thought is always of xiao long bao, colloquially known as “soup dumplings.” Unfortunately, with a late departure from SFO, our layover only allows time for one serving. Near gate C5, I ordered the same combo I had last time and it wasn’t bad, but hopefully I can do better in the regular food court on my return. 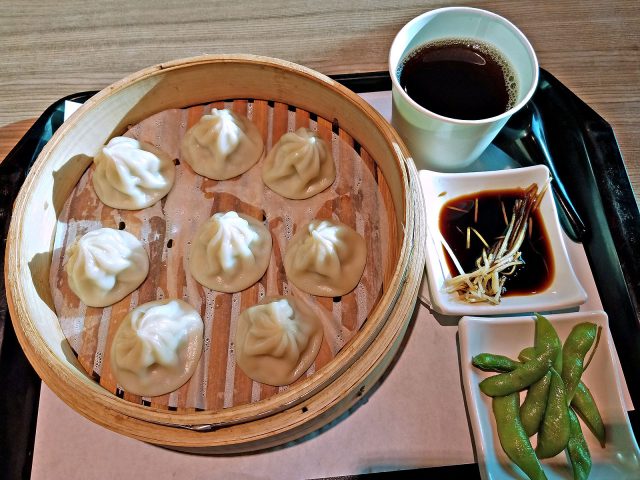 Our second leg also was on a 777, but this time I didn’t have the blessing of an empty seat. The interactive map on the video screen was more primitive and the touch function was broken, so there was less to amuse me than on the first leg. At least the stir-fried chicken and rice was good.

When arriving in Bangkok, there is always the risk of having to deplane to a bus and be driven to the terminal, or having to walk nearly a kilometer from your gate to baggage claim. This time, our gate was surprisingly close to passport control, and the lines were quite short, so we could arrive at the carousels before our bags. Very unusual, but very welcome.

I was meeting up with two trip members who had arrived 10 minutes earlier, and realized far too late how useful it would have been to exchange photos in advance. Obviously we wouldn’t have photos of what we look like after 21 hours of air travel, but we could have gotten the general idea. Fortunately, it worked out. We stopped for cash and a SIM card for my phone, and headed to the taxi line. There was a bit of a wait for large taxis, and our driver refused to use a meter, explaining blah blah blah. We eventually settled on 500 baht, which is much better than two separate taxis, so that seems fair. Traffic was very light, so we reached the hotel before check-in time, where we introduced ourselves to another three trip members.

The Salil Hotel chain has multiple locations, but their outpost on Soi Thonglor 1 (first major alley up from Sukhumwit on Soi Thonglor) is convenient for us due to the nearby BTS Skytrain line, nearby restaurants and shops, and reasonable prices. This year my room is in a different building and seems much smaller. Still, it’s functional. If only they could have pre-cooled it using a master key card — the room has no electricity without a card in the slot. I’m going to need a lot of cold beverages.

After a quick change of clothes, I headed up Thonglor to Black Amber Barber Shop, which I discovered accidentally when searching barber shops on Google maps and scrolling around the neighborhood. Unlike the $4-6 places nearby, Black Amber charges California prices. I felt that was worth a try because reviews touted their good English, expertise with the shears (and the straight razor, if that’s what you’re into), and shots of scotch. I wasn’t offered any scotch, but I did get my hair cut like a cartoon character. I can’t seem to figure out how they combed it, so I might need to return for a consultation. 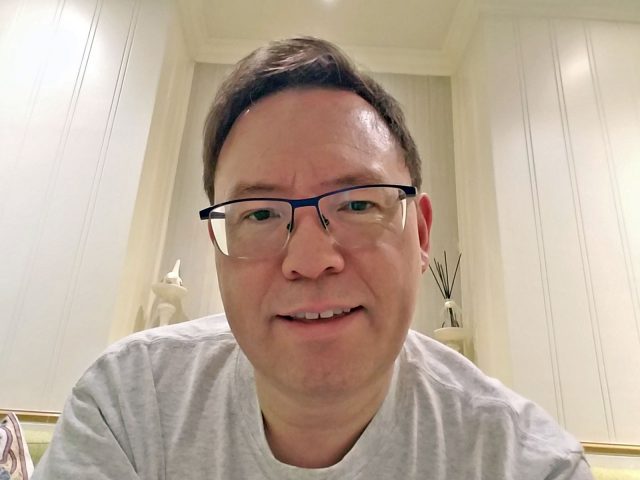 Before dinner, I wanted to begin my massage regimen with a one-hour foot massage. The local shop, now known as Wadee Massage, is still charging 250 baht (about $8.50). While my neighbor in the row of recliners had the usual reflexology massage using a wooden stick, my masseuse was using techniques more similar to a traditional two-hour Thai massage, finding tender spots along my calves and using her thumbs, elbows, and knees. At times it was rough, but I’m assuming, therapeutic. She expressed surprise that my right calf was so much fatter than my left. In recent years, I’ve arrived with one or two swollen ankles and calves. Despite much vigorous work, they remain unequal. I’ve nicknamed them Stan and Ollie.

Back at the hotel, after a brief cool-down, I met three other trip members in the lobby for dinner. We headed over to a nearby restaurant specializing in fiery Southern Thai dishes to begin conditioning our taste buds for the coming onslaught.

Khua Kling Pak Sod has an enormous menu book, lavishly illustrated with full-page photos. I knew I wanted crab tonight because we are here during peak crab season in California and I need my fix. They serve generous portions of satisfyingly plump pieces, and the garlic-basil preparation was bracingly spicy. We also enjoyed their namesake dish, khua kling, featuring a deceptively invisible curry paste infused into ground pork and “toasted” to a dry finish. The shreds of kaffir lime (also called kieffer lime and makrut lime) really sing in this dish. A crispy fried fish marinated in fresh turmeric and nearly buried in crispy fried garlic chips was delicious. I just hope I didn’t disturb too many other diners munching and crunching its fins and bones. We shared a pair of salads: finely sliced winged beans with a mildly sweet dressing, and a spicy bean thread salad (also known as crystal noodles) with the classic dressing of fish sauce, lime juice, and sugar to balance. On top of all that, we somehow managed to finish a young coconut pudding dessert offered as a holiday promotion.

When I reached the hotel, I knew I definitely needed to head over to the 7-11 for bottled water, yet the bed beckoned. I laid down for a few minutes to cool off and regain my strength. After a few cycles of waking, considering, and not getting up, eventually I surrendered, brushed my teeth, set the alarm, flipped off the lights, and passed out for good.

Tomorrow I have most of the day free to run errands and eat noodles before meeting up with the rest of the group.